Kris Jenner posted a Demi Moore-style photograph of herself from 1987 while she was pregnant with son Rob Kardashian.

The picture shows the reality star matriarch with a heavy dark fringe and longer hair, along with a large baby bump and white underwear.

The revealing picture was accompanied by a loving caption which read: “Happy 25th birthday to my wonderful, handsome son, Rob!!

“Rob, you are the best son a mother could ask for and you make me proud every day. I love you so much!!” 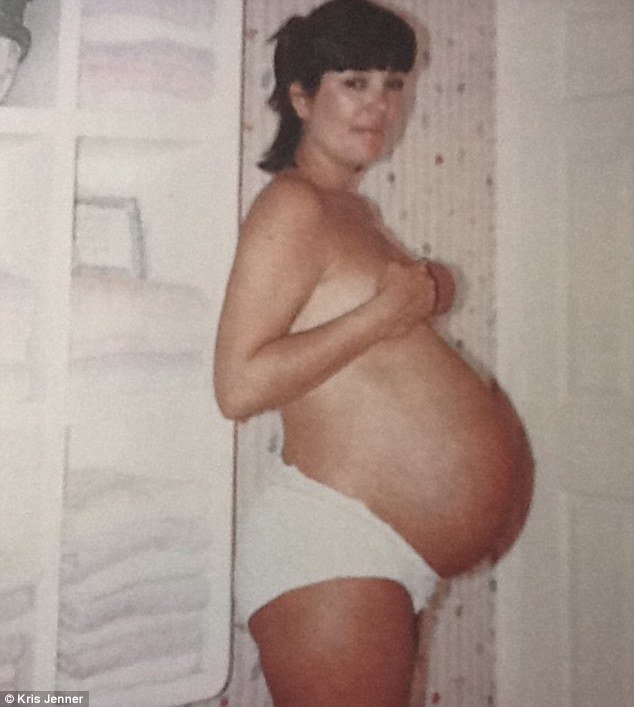 Kris Jenner joined Rob and the Kardashian clan yesterday at the 1 Oak Club at the Mirage Hotel to celebrate his birthday.

They joined little sisters Kylie and Kendall Jenner for a night of fun in Sin City.

Kim Kardashian, 31, was in her usual figure-hugging style, showing off her famous curves in a cream sequinned dress.

She tweeted several photos of her mother dancing in a private booth, writing: “Mom gone wild… How pretty is my momma!?!”

However, while teenagers Kylie, 14, and Kendall, 16, had jumped in the private jet for the mini excursion, they weren’t allowed to join the party at the 1 Oak Club because they’re underage.

Kim Kardashian strictly stipulated the pair were only allowed to join them for dinner as she tweeted about their attendance: “Even the little sisters are coming to Vegas! #DinnerOnly.”

When they were finally reunited with their mother and older siblings for their 3:00 a.m. flight back to Los Angeles, they made no secret of how bored they had been while waiting.

Kendall Jenner tweeted in the early hours of this morning: “Longest night ever…”

But Kim Kardashian had clearly enjoyed herself: “3am flight back home! What a fun night!” 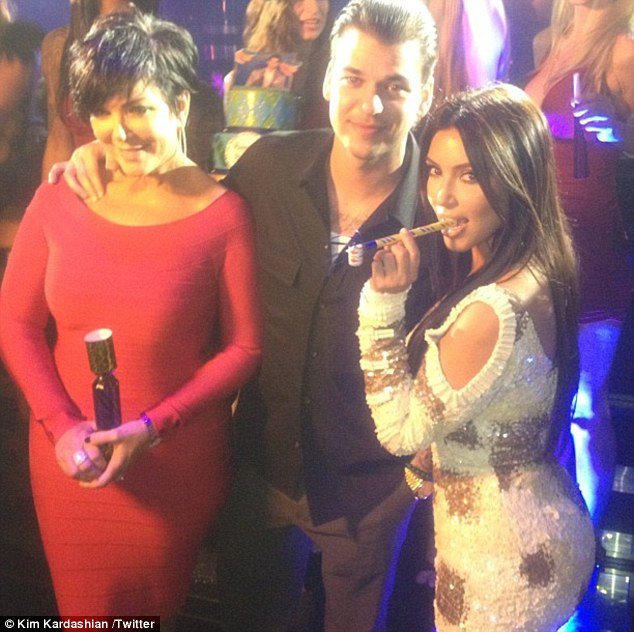 Kris Jenner, her son Rob Kardashian and daughter Kim in the 1 Oak Club at the Mirage Hotel in Las Vegas celebrating his 25th birthday

It may be a long time since Kris Jenner was pregnant, but she is getting increasingly excited over pregnant daughter Kourtney Kardashian’s impending new arrival.

“Kourtney is now angry with me because I keep bringing stuff home.”

Kourtney Kardashian is due to give birth to a little girl in July – her second child with long time boyfriend Scott Disick.

“We’re so excited and it’s such a gift and a blessing and a new personality so for us,” said Kris Jenner.

“I’m having the best time shopping!”

Meanwhile, it has emerged that Rob Kardashian is joining his sisters in creating his own fashion line.

However, unlike his sisters’ more glamorous clothing line, Rob Kardashian will be working on socks.

“I have no idea yet [what it’s going to be called],” Rob Kardashian said.

“I’ve started several companies before and people don’t know about it because I don’t vocalize it. Things succeed, they fail, and that’s how you start a business venture. So hopefully this succeeds.”