The US soldier accused of the Afghan massacre on Sunday, when he shot dead 16 civilians, had received body and brain injuries while serving in Iraq and was unhappy about going for another tour of duty, his lawyer John Henry Browne says.

John Henry Browne said the soldier – who has not been named – had already completed three tours in Iraq.

The lawyer also said the accused had witnessed his friend’s leg blown off the day before the killings.

Sunday’s shootings have placed new strains on the US in Afghanistan.

Meanwhile, a NATO helicopter carrying Turkish troops has crashed into a house on the outskirts of the capital Kabul killing at least 12 soldiers and two children on the ground.

The death toll is the heaviest single loss of life so far for Turkish troops in Afghanistan, of whom there are currently more than 1,800.

A technical fault was to blame, according to police.

The Taliban called off peace talks in the wake of the deadly rampage – in which men, women and children were shot and killed at close range – although they made no mention of the massacre in the statement.

However, the US later stressed it remained committed to Afghan reconciliation despite the move by the Taliban.

Afghan President Hamid Karzai has also told the US that it must pull back its troops from village areas and allow Afghan security forces to take the lead in an effort to reduce civilian deaths. 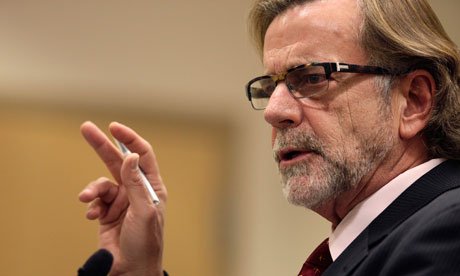 Speaking in Seattle, where the accused soldier is based at Joint Base Lewis-McChord, John Henry Browne said his new client was a "mild-mannered" man who bore no antipathy towards Muslims

Speaking in Seattle, where the accused soldier is based at Joint Base Lewis-McChord, John Henry Browne said his new client was a “mild-mannered” man who bore no antipathy towards Muslims.

The lawyer described the US soldier as “a decorated soldier” with an exemplary record before the shooting.

He also suggested the soldier was not fit to serve in Afghanistan because of injuries he had suffered on previous tours of duty.

“I think it’s of interest that we have a soldier who has an exemplary record, a decorated soldier who was injured in Iraq, to his brain and to his body and then despite that was sent back,” John Henry Browne said.

John Henry Browne, who has represented a number of high-profile clients including serial killer Ted Bundy and a teenage thief known as the Barefoot Bandit, said his client was a happily married man with two children, aged three and four.

He denied reports that the accused had problems either with alcohol or his marriage, which John Henry Browne described as “fantastic”.

The US military has not yet charged the soldier, and Jonh Henry Browne said he would not release the accused’s name until it was made public by officials.

However, despite the shock of the killings, John Henry Browne called for calm and for the soldier to receive a fair hearing.

“It’s a tragedy all the way round, there’s no question about that.

“I think the message for the public in general is that he’s one of our boys and they need to treat him fairly.”

Separately, an un-named US military official told the New York Times that the suspect had simply “snapped”, and confirmed that he was on his fourth combat tour.

“When it all comes out, it will be a combination of stress, alcohol and domestic issues – he just snapped,” the official said.

The soldier was flown out of Afghanistan on Wednesday and taken to a US military base in Kuwait.

According to the New York Times, the soldier may be moved to a US facility, such as Fort Leavenworth, Kansas, as early as Friday.

The newspaper said Kuwaiti protests over the presence of the accused soldier within their borders had prompted the US to move him quickly.

The attack, in Kandahar province, was the latest in a string of damaging incidents involving US troops in Afghanistan.

Last month, the burning of Korans by troops sparked a string of violent protests in several areas.

The latest attack has also caused uproar, with about 2,000 people demonstrating in the southern province of Zabul on Thursday, the second major protest outside Kandahar this week.