Louis Sarkozy, 15, and two friends launched the attack on the female officer from the courtyard of the Elysee Palace in Paris – also hitting the officer in the cheek with a marble.

The female officer filed an official criminal report, but the case was dropped after the hugely embarrassed Nicolas Sarkozy apologized to her in person.

There were accusations that aides close to President Nicolas Sarkozy tried to “hush up” the scandal because he is currently standing for re-election.

Reports of delinquent behavior by Nicolas Sarkozy’s own son could certainly not have come at a worse time for the conservative head of state, who prides himself on his tough law-and-order policies.

It also raised serious questions about the discipline of the presidential children, who are largely kept out of the public eye by Nicolas Sarkozy and his third wife, Carla Bruni.

The tomato was among a volley of marbles and rolled up pieces of paper which went flying over the palace gates on Thursday, hitting the woman as she walked up and down the Rue du Faubourg Saint-Honore outside. 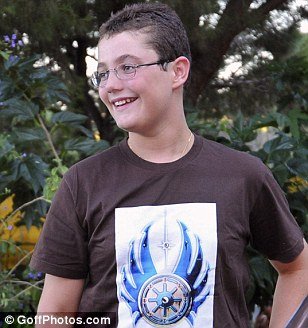 Louis Sarkozy, the youngest son of French president Nicolas Sarkozy, threw a tomato and other objects at a police woman standing outside Elysee Palace

The woman filed an official report, which led to a high-level enquiry, including a meeting between Paris police chiefs and officers of the Republican Guard, who are directly responsible for the safety of the presidential family.

The director of the Paris prefecture is also said to have become involved, with a Paris police source saying: “A criminal complaint was considered, but the police woman was finally persuaded to drop it.

“In the end she made do with an apology from the President, after being told that Louis and his friends frequently played in the courtyard of the Elysee.

“However, the fact that there is an election campaign in progress clearly played a significant role in the complaint not proceeding.

“It may well have been hushed up to save Mr. Sarkozy embarrassment. These were not childish pranks – Louis is 15-years-old.”

Louis is the son of Nicolas Sarkozy’s second wife, Cecilia Attias, whom he famously divorced within a few months of becoming president in 2007.

Nicolas Sarkozy has two older sons, Pierre and Jean, who are frequently involved in scandals linked to their father.

Last month Nicolas Sarkozy spent $47,000 of French taxpayers’ money repatriating Pierre, a 26-year-old DJ, from Ukraine after he fell ill after complaining of “food poisoning” before a nightclub performance.

Five years ago Nicolas Sarkozy was accused of using the police force to help his son Jean, now 27, after he was accused of committing a hit-and-run crime on his scooter.

A motorist claimed that Jean Sarkozy ran into the back of his car in the Place de la Concorde, made an obscene hand gesture and then rode away. Jean Sarkozy was eventually cleared of all charges.

Nicolas Sarkozy has also a baby girl, Giulia, with Carla Bruni. However, France’s First Lady refuses to allow the child to be seen in public, and tends to keep her at a town house well away from the Elysee.

Carla Bruni also has a son, Aurelien, 11, from a previous relationship, and he too is kept well away from the public eye.