Home Front Page Venus and Jupiter conjunction will reach its closest point in the coming...

The conjunction of Venus and Jupiter in the sky will reach its closest point in the coming days.

Despite being vastly far from one another in space, the conjunction will make them appear just a few degrees apart in the sky – about the width of a pair of fingers held at arm’s length.

The pairing of Venus and Jupiter can be seen to the west-southwest, shortly after sunset.

Venus is the brighter of the two, and Jupiter will appear to move in a line past it for the rest of the month. 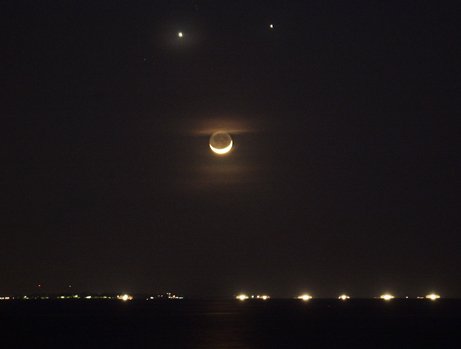 The Slooh network of telescopes will be broadcasting the conjunction live on the web from 02:30 GMT on Monday morning.

This is an active period for planet-watchers. Last Monday, Mars made its closest approach to Earth in more than two years.

But the spectacle is not over. February saw the Moon join the celestial dance with the planetary pair; it will return in late March, appearing to head up and past the descending Jupiter and then Venus.

The most anticipated planetary event for 2012 will be the transit of Venus in early June, when it will appear from some locations on Earth to pass in front of the Sun.