Ashton Kutcher was spotted out with his rumored new love Lorene Scafaria yesterday in Los Angeles.

Though his rep insisted they’re “just friends”, Ashton Kutcher, 34, and screenwriter Lorene Scafaria, 33, appear to be anything but.

Ashton Kutcher was all smiles as he and screenwriter Lorene Scafaria headed out with a group of friends to LA’s popular game spot, Ultrazone.

The pair arrived with their faces painted and ready to go as they boarded a party bus.

Ashton Kutcher was dressed casually in a dark cardigan and ball cap, a white T-shirt and grey trousers.

His concessions to color were an orange belt and a matching pair of trainers. 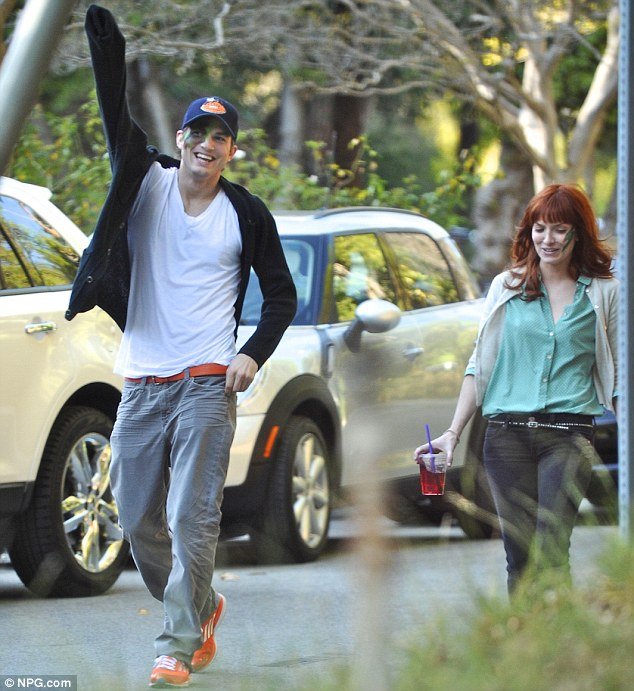 Ashton Kutcher and Lorene Scafaria were first spotted touring Italy together over the holidays, immediately after Demi Moore, 49, announced their split.

Though his spokesperson insisted they were platonic friends, a slew of recent reports have more than suggested otherwise.

Screenwriter Lorene Scafaria is best known for her work on the 2008 film Nick and Norah’s Infinite Playlist.

Lorene Scafaria is also good friends with fellow writers Diablo Cody (Juno) and Dana Fox (What Happens in Vegas), who she collaborates with in their writing group they call the “Fempire”.

She is currently working on her directorial debut for her self-penned script Seeking A Friend for the End of the World a romantic comedy that focuses on one man’s quest for a meaningful connection amid the “end of days”.

Us Weekly reported Ashton Kutcher and Lorene Scafaria engaged in some public kissing at a charity event on February 25.

An insider told the magazine: “They were affectionate.

“When they thought no one was watching, they held hands, and she rubbed his back and his neck.”

Demi Moore checked in to the centre after a health scare in late January and is said to now be on vacation at an undisclosed location.

People magazine reports that Ashton Kutcher did the right thing by his ex-wife (this time) and visited her while she was in rehab.

Demi Moore was hospitalized after going into convulsions whilst smoking an incense-like product.

The actress reportedly checked in for “stress and exhaustion”.