Bobbi Kristina, the only child of Whitney Houston and ex-husband Bobby Brown, who turns 19 on March 4, has had troubled teen years, marked by cocaine use and heavy drinking.

After Whitney Houston’s funeral, Bobbi Kristina Brown reportedly disappeared only to be found “getting high”.

“I’m just like my mother,” Whitney Houston’s daughter once told a friend.

And for a while Bobbi Kristina Brown, Krissi, as she’s known to family and friends, appeared to be headed down the same destructive path that her mother walked.

The teenager has even been arrested following a violent incident where a gun was pulled.

The first sign of problems occurred when Bobbi Kristina was only 12 and she was photographed drinking from a wine glass while her parents looked on.

Then, on February 17, 2008, tortured by the divorce of her parents the year before, Krissi tried to stab Whitney Houston during a heated argument over her behavior and then she tried to commit suicide by slashing her wrists.

“Bobbi Kristina has been running around drinking and par¬tying, doing whatever she wants to do,” family member Ann Davis said at the time.

Krissi was admitted to a psychiatric ward at Peachford Hospital in Atlanta and Ann Davis said she refused to have either Whitney Houston or Bobby Brown visit her. 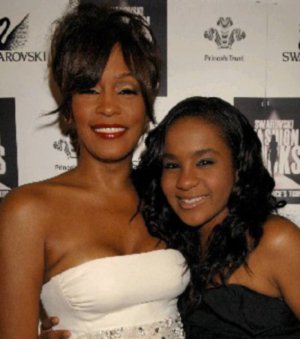 Bobbi Kristina Brown, who turns 19 on March 4, has had troubled teen years, marked by cocaine use and heavy drinking

On March 2011, the National Enquirer published shocking photographs of Bobbi Kristina Brown snorting lines of cocaine at two different parties in Alpharetta, Georgia, just a few miles from where she lived with her mother.

A former boyfriend, who dated Bobbi Kristina Brown for two and half years and took the photos, told the National Enquirer at the time: “Krissi is addicted to cocaine. I’ve tried to stop her, but all she said was, ‘I’m just like my mother!’ If Krissi doesn’t stop soon, cocaine will kill her!”

The boyfriend said booze played a major part in Bobbi Kristina’s life when they first met.

“We had mutual friends. We planned to look out for each other. But when I met Krissi at one party, she was drunk on Everclear [grain alcohol] and she’d already made out with three of my friends.

“Despite that, we began to date, but during the first few months I knew her, I can’t remember a time that she stayed sober all day.

“It was difficult to stop her from buying alcohol and drugs because her mother gave her $1,000 a week. I saw Krissi do an eightball [pieces of cocaine weighing an eighth of an ounce each] in just two days with friends.”

The boyfriend said Whitney Houston originally did nothing to stop Bobbi Kristina from drinking and taking drugs.

“One time Whitney bought a case of beer for Krissi and her friends to drink in front of her. I couldn’t believe it!” the ex-boyfriend said.

“She also had a Xanax prescription and was addicted to that. Once she had a meltdown because she’d run out, and Whitney found a pill to give her.”

All the while, Whitney Houston and Bobby Brown just blamed each other for Krissi’s behavior.

In shame, Whitney Houston shelled out $49,000 to enroll Bobbi Kristina in an outpatient program at Talbott Recovery in Atlanta. The treatment was short-lived.

“Whitney pulled Krissi out of the program after one day because she was afraid of what Krissi would tell the other addicts about her in group sessions,” a source said.

“Krissi had been fighting rehab anyway, saying she’s not addicted to cocaine.”

The National Enquirer also revealed that a boozing Bobbi Kristina was arrested when she got caught up in the middle of a terrifying incident in Roswell, Georgia, on April 1 2011.

The blowup involved her ex-boyfriend Max Lomas and Nicholas Gordon, a teenager known as the Whitney Houston’s “secret son”.

A police report described how Max Lomas and Nick Gordon – who told police he was Krissi’s brother – were angered after seeing Bobbi Kristina driving with three male friends and followed them in Gordon’s car to a Chevron gas station.

At the gas station, Max Lomas allegedly beat up one of Bobbi Kristina’s friends. Nick Gordon admitted to police he waved a gun in the air during the fight.

Police later found a Glock 19 handgun in his glove compartment.

The incident seems to have scared Bobbi Kristina straight. And in truth, she dearly loved her mom. In the past months, Bobbi Kristina has happily joined her mom on stage at performances and even sang a few duets with her.

Bobbi Kristina was thrilled that Whitney Houston took her along to the Beverly Hilton, where they looked forward to attending the Grammy Awards show together.