U.S. retail giant Target has been forced to pull a greetings card from the shelves that poked fun Whitney Houston’s relationship with her ex-husband Bobby Brown after a public outcry.

Target offended their customer’s by stocking the light-hearted product, which read: “Next time you think of dating the bad boy consider Whitney Houston.”

Target decided to pull the card after receiving angry complaints from customers.

A Target spokesman insisted it had been available long before Whitney Houston’s body was discovered on February 11 in the bathtub of Beverly Hilton hotel room in Los Angeles. 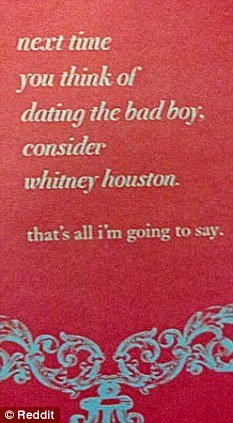 Target’s representative added: “As soon as this was brought to our attention, we began the process of removing the card from all applicable stores.

“It is never our intent to offend guests with the products we offer, and we take feedback from guests very seriously.”

Whitney Houston and Bobby Brown were married for nearly 15 years before divorcing in 2007, and he has been blamed by many for getting the singer involved in drugs.

The news comes after Whitney Houston was being featured in the latest issue of popular music magazine Rolling Stone.