The Fairview Cemetery in Westfield, where Whitney Houston was laid to rest in a private ceremony Sunday was closed to fans on Monday amid a crush of visitors eager to catch a glimpse of the fallen superstar’s grave.

As news helicopters idled overhead, more than 100 vehicles clogged Fairview Cemetery’s narrow lanes, the traffic spilling from the entrances to the streets outside.

“Someway, somehow, word got out that the cemetery was open to the public,” Westfield police Capt. Cliff Auchter said.

“And in the early afternoon, there was a tremendous increase in visitors that created tremendous traffic problems.”

Early in the day, cemetery personnel and police allowed small groups of visitors to approach the grave site, its bare earth heaped with flowers. Two officers stood watch nearby, ensuring nothing was taken.

But as morning blended into afternoon, the number of visitors grew, causing gridlock on the unmarked paths and on roads outside the cemetery.

In addition, according to a Westfield police officer at the scene, members of the singer’s family arrived to pay their respects and were troubled by the crowds. The relatives requested that access to the site be restricted, said the officer, who declined to give his name. 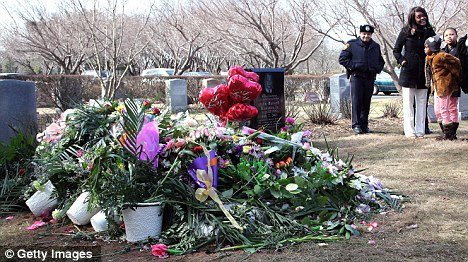 Police closed the cemetery gates shortly after 2:00 p.m., allowing passage only to those with loved ones inside. Whitney Houston, who died on February 11 at age 48, is buried near her father, John Russell Houston, Jr.

Monday’s spectacle brought some substance to the fears voiced by Westfield residents leading up to the burial. They said they worried Fairview would become a tourist attraction, transforming a place of reverence into a carnival.

Ted Simpson, a resident of neighboring Garwood, posted a hand-made sign across the street from the cemetery, urging the public to stay away.

“If you want to show your love, buy her music.”

Whitney Houston’s family has struggled to maintain its privacy, no small task given the public interest in the death of one of the world’s top-selling female vocalists and the scores of celebrities who attended her funeral in Newark Saturday.

Cliff Auchter, the Westfield police captain, said that until further notice, the cemetery will be open only to those with family buried there.

“I don’t know how long this is going to go on for,” he said.

“People will always be trying to pull a fast one to get in. We have to be attuned.”