British boxer Dereck Chisora has been arrested by German police after a brawl with fellow boxer David Haye in Munich at the post-fight news conference after Chisora was defeated by Vitali Klitschko.

Dereck Chisora and his trainer, Don Charles, were taken from Munich airport by police as part of the investigation.

David Haye and Dereck Chisora clashed at the post-fight press conference after Chisora was beaten on points by defending WBC champion Vitali Klitschko.

Police are still searching for David Haye, who was not present at the hotel when sought for questioning.

David Haye showed up at the news conference to confront Vitali Klitschko, who he believes changed his mind on a potential fight between the pair.

However, that sparked a verbal exchange with Dereck Chisora and the pair squared up to each other before a brawl ensued.

Dereck Chisora accused David Haye of “glassing him”, before saying at least four times that he would shoot the former WBA heavyweight champion.

He added: “If David doesn’t fight me, I am going to physically burn him.”

Dereck Chisora arrived at the airport to return home, but was stopped by police, who have detained him at their Munich headquarters.

A Munich Criminal Police spokesman said: “Police picked up Mr. Chisora at the airport at approximately 10:30 a.m. [German time] and are bringing him in for the investigation.

“They also picked up Mr. Chisora’s trainer for questioning. The police went to the hotel to speak to them but we had been informed they had just checked out.”

The spokesperson added: “At present we do not know where Mr. Haye is.

“We are currently looking for him. He was not at the hotel this morning and we have not seen him at the airport.” 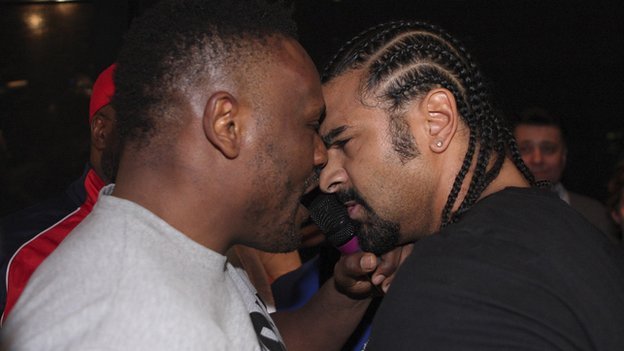 Dereck Chisora has had part of his fight purse withheld by the World Boxing Council after he slapped Vitali Klitschko at the pre-fight weigh-in on Friday.

More controversy followed when Dereck Chisora exchanged words with the Klitschko’s after the result was announced.

The British Boxing Board of Control has said it will review the incident.

Bernd Boente, manager of Vitali and Wladimir Klitschko: With the bad experience we’ve had with British fighters, we will now look for other countries. Contrary to David Haye, Dereck Chisora really went for it. He really tried.

David Haye (from rear of the room): You don’t want to fight David Haye, no?

Boente: You had an offer. You didn’t accept it. Now you are out. You are out. Out, out, out. You cannot talk yourself back into the fight; you have no belts. Chisora showed heart, contrary to you. You showed your toe [referring to Haye’s toe injury].

Haye: I accepted your offer in December.

Dereck Chisora: We’ll get it on in London – be quiet. David Haye is an embarrassment, Sky Sports don’t do Box Office any more because of David Haye. He messed it up for all those young fighters coming through. I’m going to give you two slaps for that. If Haye is a fighter, he should fight me.

Chisora’s trainer Don Charles: Be quiet, can security get him out of here?

Haye: Vitali said after his last fight, ‘I want to fight David Haye’. Where is he now? He said he wanted to fight me, I agreed the money, I agreed everything in December.

Chisora leaves his seat and approaches Haye at the back of the room, where a melee ensues. Haye at one point picks up a video camera tripod and swings it.

The two are eventually pulled apart before Chisora returns to the front of the room.

Chisora: (Referring to Booth’s cut) I’m sorry about that. Adam, your fighter glassed me.

Booth: I want to know who glassed me.

Chisora: As you were trying to hold your fighter away, he [Haye] probably glassed you by mistake.

Booth: You hit me with a bottle.

Chisora: David had a bottle in his hand.

The two are separated before Booth addresses Vitali Klitschko.

Booth: Vitali, you are a great fighter but your manager is an embarrassment to the sport. Congratulations for winning.

Chisora: (Addressing Booth) Either we do it in the ring or outside of the ring. Because I want him. If David don’t fight me, Adam, I am telling you the God’s honest truth, I am going to physically burn him. So you tell him I said that. I am going to find him.