Just hours after he stormed out of his ex-wife Whitney Houston’s funeral, Bobby Brown appeared upbeat as he performed onstage with his New Edition bandmates to a 7,000 sellout crowd at Mohegan Sun Arena in Uncasville, Connecticut.

Bobby Brown reportedly stormed out of his ex-wife Whitney Houston’s funeral following a dispute over seating arrangements and not being allowed to be with his daughter Bobbi Kristina.

Bobby Brown, 43, said he left the service after kissing the casket of his ex-wife whitney Houston because “he refused to make a scene”.

Bobby Brown’s outfit was a far-cry different from the all-black mourning attire he had worn to attend Whitney Houston’s funeral hours earlier.

He appeared in good spirits as he sang to the crowd, smiling at times and pulling quirky expressions.

The singer arrived onstage a reported 10 minutes late after his band already started the performance, according to USA Today. 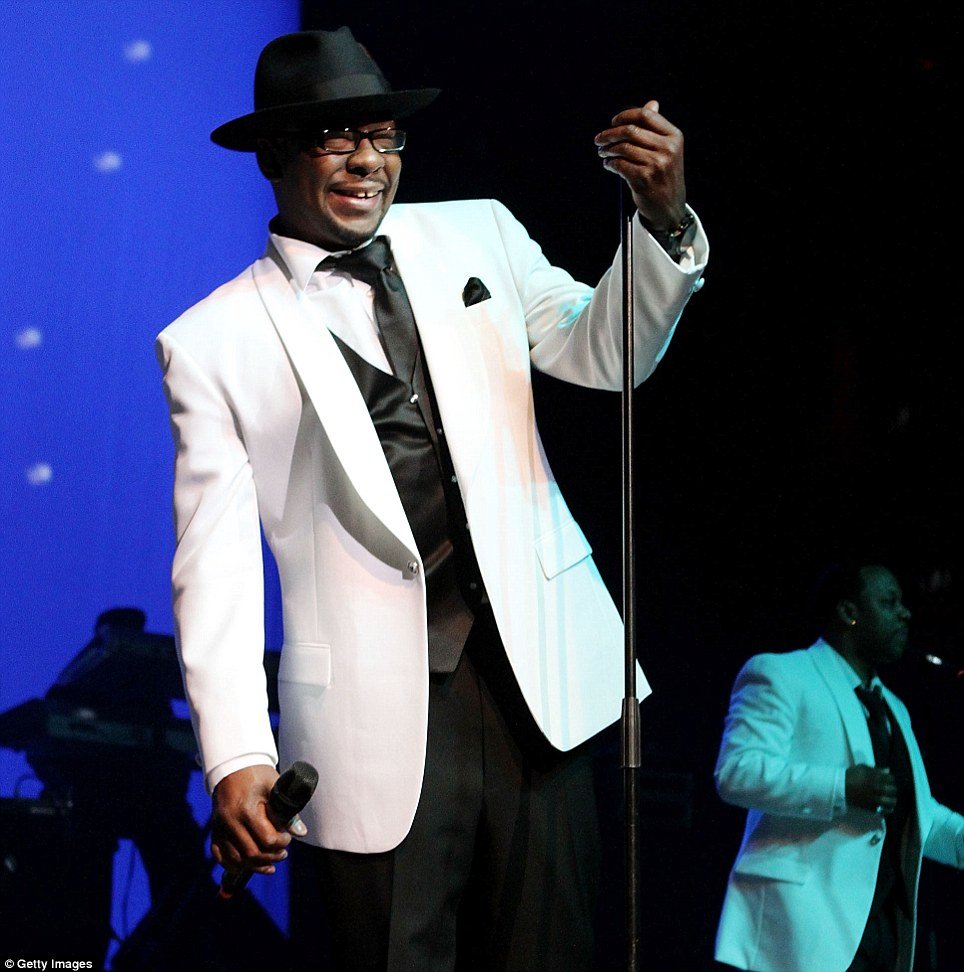 During the fourth track Bobby Brown was said to have strode up to the stage to cheers from the audience and addressed the crowd.

Before launching into his track Hit Me Off, he added: “And if you didn’t already know, I go by the name of bad a** Bobby Brown.”

After singing several of his famous songs including My Prerogative, Bobby Brown once again referred to Whitney Houston’s tragic passing.

“I lost three great people in my life in the last year, but nothing makes me happier than to be here with you,” he said.

Some concertgoers believed that Bobby Brown’s onstage appearance so soon after today’s funeral was insensitive.

“I grew up on New Edition, and want to see how Bobby responds,” William McGarrah told USA Today.

“(It was) a little insensitive, and (it) shows how much he needs the money. I thought he would take time off to be with his daughter.”

Bobby Brown it appears spent very little time with his daughter Bobbi Kristina today during and following the funeral for her mother.

He had left the service early after an alleged altercation with security over seating.

Bobby Brown was cheered by fans as he arrived at the New Hope Baptist Church in Newark, New Jersey, but according to a mourner at the service, family became “frustrated” inside.

TMZ reported Bobby Brown became angry after the Houston family refused to seat his entourage of nine people. He had apparently been invited with a plus two.

Insiders told TMZ Bobby Brown wanted to sit with Bobbi Kristina on the front row – but he wasn’t allowed.

Bobby Brown has since released a statement, explaining his abrupt departure, saying he was moved by security three times.

In a statement put out by his representative, Bobby Brown said: “My children and I were invited to the funeral of my ex-wife Whitney Houston. We were seated by security and then subsequently asked to move on three separate occasions.

“I fail to understand why security treated my family this way and continue to ask us and no one else to move,” he said.

The statement went on: “Security then prevented me from attempting to see my daughter Bobbi Kristina. In light of the events, I gave a kiss to the casket of my ex-wife and departed as I refused to create a scene.

“My children are completely distraught over the events. This was a day to honour Whitney. I doubt Whitney would have wanted this to occur. I will continue to pay my respects to my ex-wife the best way I know how.”

Shortly after the service began Bobby Brown was seen leaving the church with a grim expression on his face accompanied by a female companion.

They stood outside for a few moments before getting in to a waiting SUV and drove off.

Bobby Brown, who Whitney Houston’s family blamed for her drug addiction, had reportedly been invited after her family put aside their differences and begrudgingly said he could come.

As Bobby Brown was waiting outside the church an unidentified man stood next to him crying uncontrollably.

Bobby Brown himself appeared to be wiping away a tear as he got into his car.

Live coverage from inside Whitney Houston’s funeral showed her daughter Bobbi Kristina and mother Cissy sat on the front row.

They were yards away from Whitney Houston’s flower drenched coffin, which took centre stage on the very alter where she sang as a child at the New Hope Baptist Church in Newark, New Jersey.