Home Travel Jellyfish Lake: the only place in the world where tourists can safely...

Jellyfish Lake, based on the Pacific island of Palau, is the only place in the world where tourists can safely swim amongst millions of jellyfish because the sometimes deadly creatures have lost their sting.

The lake was once connected to the Pacific Ocean but when the sea level dropped jellyfish became isolated in the algae rich lake.

With no risk of being eaten by predators, the jellyfish population thrived and there is now estimated to be up to 8 million jellyfish living in the lake.

Over time their stings weakened and these amazing images show tourists can now swim alongside the jellyfish without fear of being stung. 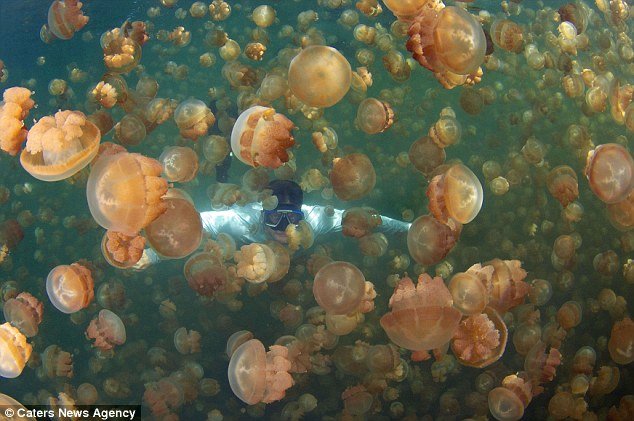 Jellyfish Lake, based on the Pacific island of Palau, is the only place in the world where tourists can safely swim amongst millions of jellyfish

Kevin Davidson, 51, who runs a small camera shop in Palau, said: “People who have a fear of jellyfish freak out, some people just turn around and leave, but there are no dangers.

“The jellyfish have evolved into their own subspecies and have slowly lost their stinging cells, some snorkelers may feel a slight sting on more tender parts of the skin, but they’re harmless.

“Swimming in the lake is an experience of a lifetime.

“It’s hard to describe how it feels but it’s unusually quiet and you can just feel hundreds of soft blobs touching your skin as you move slowly through the water.

“Since first visiting the lake almost 15 years ago, it’s become a small obsession. I’ve been hundreds of times, each thinking of a new way to photograph the tourists and the jellies.”