A shocking picture of Whitney Houston’s bathroom took at her home in Atlanta, Georgia, shows how the star’s life spiraled into chaos at the height of her crack addiction.

The deplorable image, shot in 2006, shows a room littered with drug paraphernalia, including a crack-smoking pipe and spoons covered in white powder.

Despite her fame and wealth, Whitney Houston had descended into squalor, her sister in law Tina Brown, who took the photo, revealed at the time.

Drug paraphernalia can be seen in the room, where Whitney Houston holed up for days, according to Tina Brown, the sister of the singer’s husband Bobby Brown.

Whitney Houston, 48, smoked as much as an “eight-ball” (1/8 of an ounce) of crack at a go, blending it with marijuana inside in a cigar wrapper, Tina Brown, also a self-confessed former addict, told the National Enquirer.

Tina Brown said: “The truth needs to come out. Whitney won’t stay off the drugs. It’s every single day. It’s so ugly. Everyone is so scared she is going to overdose.” 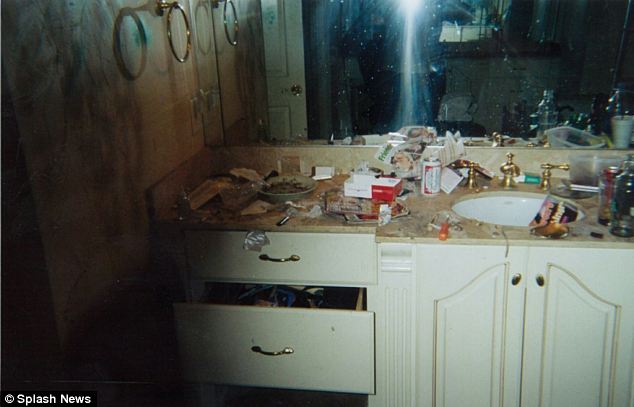 A shocking picture of Whitney Houston's bathroom took at her home in Atlanta, Georgia, shows how the star's life spiraled into chaos at the height of her crack addiction

The drugs made Whitney Houston so paranoid she saw evil apparitions and once drilled a spy hole in her bathroom to keep an eye out for demons, Tina Brown claimed.

Whitney Houston at one time claimed she didn’t do crack, telling Diane Sawyer in 2002 that she made too much money to ever take the street drug. “Crack is whack,” she famously declared.

But her stunning looks later seemed to be ravaged by her habit.

And although Whitney Houston subsequently got clean, recording a comeback album in 2009, the years of abusing her body also took their toll on her voice.

At her comeback tour in Australia in 2010, Whitney Houston shocked fans when she had to take a 20 minute break to rest her voice.

Whitney Houston was set to make a return to the big screen later this year having filmed Sparkle, due to hit cinemas August 10. But the pressure to succeed was overwhelming.

Whitney Houston “was in pain from all the pressure she was facing”, the source said.

“I know from when she was recording her most recent album – her comeback album (I Look to You in 2009) – her voice was shot. That bothered her.”

“In the music industry, you’re only as good as your last hit, even if you are Whitney Houston. Then she had people gossiping about her … It was a lot to deal with.”

Whitney Houston had blown a massive fortune, earned over decades of royalties and concert tours on her drug habit and was “broke as a joke”, it was last week claimed.

“Music industry heavy hitters are supporting her and her label is fronting her cash against her next album, but no one knows when that will be released.”

“She might be homeless if not for people saving her. She is broke as a joke.”

The legendary singer had been reduced to begging friends for help.

“It is so sad. She should have Mariah Carey money, and she’s flat broke.”