Shortly after Beyonce and Jay-Z presented the first photos of their daughter Blue Ivy, Mariah Carey and Nick Cannon got in on the act, tweeting an awe inspiring photo of their twins, Monroe and Moroccan.

Mariah Carey posted the photo showing the nine-month-old girl and boy wearing white jumpers, while posing on a bed.

The singer tweeted the picture of the smiling children with a link redirecting her followers to a website devoted solely to the babies.

It was accompanied by the message: “New #DemBabies picture @ http://www.dembabies.com, first one from 2012 🙂 LYM!!”

Monroe and Moroccan, who Mariah Carey and Nick Cannon refer to as “dem babies”, were born on April 30, at a Los Angeles hospital. 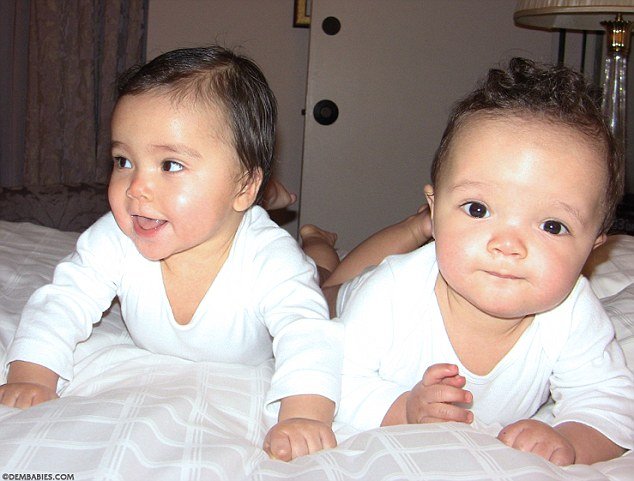 Mariah Carey, 41, has previously admitted that pregnancy was tough on her, saying: “My body went through so much – you have to keep those twins in as long as possible, but it’s a sacrifice you make for them.”

Mariah Carey is now a spokeswoman for the Jenny Craig weight loss programme and has dropped more than 30 pounds.

Now she is stepping behind the camera to direct the diet company’s next commercial.

The singer will produce a new public service announcement for the American Heart Association that débuts this month.

“I’m so honored to be a part of this,” she said recently.

“It’s more than just about losing weight-it’s about raising consciousness. I was very surprised to learn that every 34 seconds someone has a heart attack, but it doesn’t have to be this way.”

“By living just a little healthier, you can make a difference,” Mariah Carey added.