First Lady Michelle Obama was challenged to a push-up contest on Ellen DeGeneres show during her California tour for promoting her health agenda.

The challenge began when Ellen DeGeneres asked Michelle Obama on her show: “How many push-ups can you do? Because I like to do a push-up.”

“I don’t know I can do some – can you? I know you’ve got these back issues,” Michelle Obama teased.

Ellen DeGeneres then stood up and took off her jacket, and a smiling Michelle Obama, who has completed push-ups with Archbishop Desmond Tutu stood up ready to take on the challenge.

They started doing the push-ups on the studio floor with the audience counting along – Michelle Obama completed an impressive 25.

“I thought it wouldn’t be good to show off the first lady so I stopped,” quipped Ellen DeGeneres after quitting. 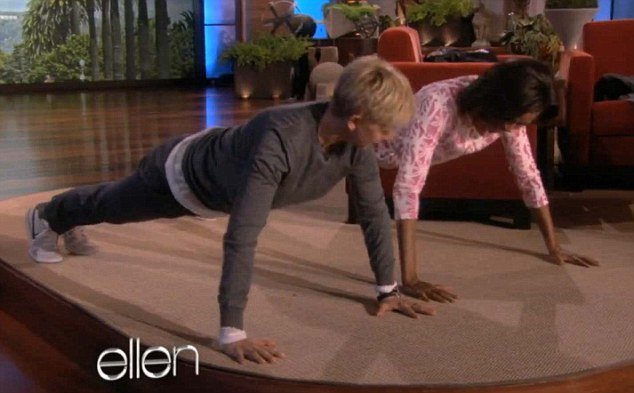 During the show, Michelle Obama also revealed some bedroom secrets regarding husband Barack.

He doesn’t pick up his socks.

“He thinks he’s neat but he has people who help him. I’m like it’s not you that’s neat. It’s the people who pick up your socks. Those are the neat people,” Michelle Obama told Ellen DeGeneres.

Michelle Obama also joined Ellen DeGeneres in a boogie for the benefit of the audience.

The First Lady has spent the last few days in California, promoting her health agenda and making high-profile TV appearances.

On Tuesday night Michelle Obama told Jay Leno: “I can’t sing.” She claimed that her husband was in the habit of serenading her.

Earlier on Wednesday Michelle Obama spoke in a vacant store in Inglewood which is set to refurbished as a health food store.

The First Lady praised efforts to improve public health, saying: “We’re not just making this generation healthy. We’re making the next, and the next and the next.”

The day before, she revealed that the President loves to serenade her by singing songs from Al Green, Marvin Gaye and other R&B greats.

“He does have a beautiful voice, and he sings to me all the time,” Michelle Obama told Jay Leno on The Tonight Show.

Barack Obama gained attention in January for breaking out a bar of an Al Green song during a fundraiser at the Apollo Theater in New York City.

But he also sings Marvin Gaye and even “a little Stevie”. That’s Stevie Wonder, for the uninitiated.

Mitt Romney surprised supporters in Florida with an off-pitch version of “America the Beautiful” on Monday, and Jay Leno asked Michelle Obama for her opinion.

“It’s beautiful,” she said after a pregnant pause, with a laugh and raised eyebrows.

“And it is America’s song, and it’s a song that’s meant to be sung by every American,” the First Lady said in a taped appearance for the NBC show.

Jay Leno told her: “That is right, regardless of political affiliation.”

Michelle Obama also cajoled Jay Leno into nibbling on apples, sweet potato fries and a pizza made with eggplant, green peppers and zucchini, breaking his long-held aversion for all-things-healthy in his diet.

Jay Leno once told a magazine he hadn’t eaten a vegetable since 1969, and he insisted he tasted his last apple in 1984. That didn’t dissuade the First Lady, who’s promoting her “Let’s Move!” campaign to get kids excited about fitness and healthy eating habits.

Earlier, Michelle Obama poked at him in a Twitter post, hinting she’d “get Jay to eat some veggies” on the NBC show. He did.

“That does smell very good. I assume this is sausage-pepperoni,” the comedian quipped as he eyed the pizza made with a whole-wheat crust.

Michelle Obama convinced Jay Leno to dip an apple in honey made from beehives in the White House garden: “It will help it go down easier,” she assured him.

“You know, with a different president that could mean a whole different thing, <<a little White House honey>>.”