Parijat Saha, a teacher from India, got the shock of his life when he checked his bank account online and found 490 billion rupees ($9.8 billion).

Parijat Saha expected his balance to be $200 and could not believe his eyes – but a check at an ATM confirmed his billionaire status, on paper at least.

The honest Parijat Saha rang the State Bank of India (SBI) to point out the error.

Red-faced bank officials would not comment, but sources say the funds were “uncleared” and he could not have withdrawn the money if he had tried. 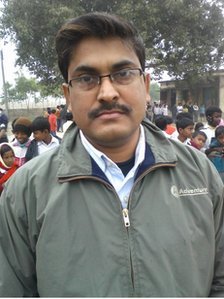 Parijat Saha, a teacher from India, got the shock of his life when he checked his bank account online and found 490 billion rupees ($9.8 billion)

Parijat Saha’s monthly salary as a school teacher in the eastern state of West Bengal is 35,000 rupees ($700).

But his account balance of $9.8 billion is closer to India’s annual education budget of $11.5 billion.

“On Sunday evening, when I was checking my savings account balance on the internet, I was expecting an amount of a little more than 10,000 rupees ($200),” said Parijat Saha, who lives in the town of Balurghat in South Dinajpur district.

The billions he found there instead have left him in shock.

“I called up a friend in the bank and joked, maybe money is overflowing in your bank, that’s why your system has remitted so much money into my account,” Parijat Saha said.

The government-run bank – motto “Safe Banking with SBI” – has not explained what happened.

Subhashish Karmakar, chief manager of the bank’s branch in Balurghat, declined to speak about the source of the funds or how the money got into Parijat Saha’s account.

“I have been specifically asked not to comment on this issue,” he said.

Parijat Saha says he has managed to withdraw the $200 from his account that belonged to him.

“Even though I got my money back, the account still holds the billions of dollars as uncleared amount. I don’t know how long I’ll have to keep that astronomical figure in my account.”