Sarah Burke, the Canadian freestyle skier, has died from injuries sustained in a training accident, a family spokeswoman says.

Sarah Burke, 29, helped bring freestyle skiing events to the Winter Olympics, and was considered a gold medal contender for the 2014 Games.

The Canadian freestyle skier was injured in a superpipe accident at Park City in the US state of Utah. 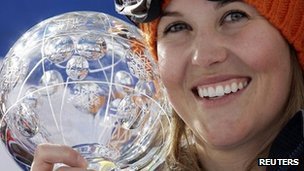 Sarah Burke, the Canadian freestyle skier, has died from injuries sustained in a training accident

Sarah Burke was airlifted to hospital after her crash on 11 January.

The best-known athlete in her sport, Sarah Burke specialized in skiing the superpipe – a version of a traditional halfpipe with walls over 5 m (16ft) high.

“Sarah, in many ways, defines the sport,” Peter Judge, chief executive of Canada’s freestyle team, said before she died.

“She’s been involved since the very, very early days as one of the first people to bring skis into the pipe.”

“She’s also been very dedicated in trying to define her sport but not define herself by winning. For her, it’s been about making herself the best she can be rather than comparing herself to other people.”

A native of Midland, Ontario, Sarah Burke won was named female action sports athlete of the year by TV network ESPN in 2007.

Sarah Burke tore her vertebral artery as a result of the fall, which led to severe bleeding on the brain. That caused her to go into cardiac arrest on the scene, where CPR was performed.

“The family expresses their heartfelt gratitude for the international outpouring of support they have received from all the people Sarah touched,” Nicole Wool, her spokeswoman said.

Sarah Burke’s organs and tissues were donated as per her wishes.

The sport’s leaders defend the safety record of the superpipe and other freestyle events, pointing to requirements for mandatory helmet use, air bags on the sides of pipes during practice and better pipe-building technology.

“There are inherent risks in everything,” Peter Judge said prior to her death.