Ben Ellis, from Gilmer County, Georgia, a 14-year-old boy was found dead in his bed the day after having his wisdom teeth removed.

Ben Ellis had the dental surgery on Wednesday morning. Less than 24 hours later he was dead.

Law enforcement is investigating the teenager’s mysterious death and will perform an autopsy and toxicology tests, but there is said to be a history of seizures in the family, which Ben Ellis has suffered from before.

Ben Ellis’ family told the Sheriff’s Office that he seemed fine on Wednesday after the surgery, according to wsbtv.com.

“He had dental surgery at approximately 10:30 on Wednesday morning. Through the rest of the day he seemed to be doing fine. He went to bed.

“Through the day he had taken one penicillin tablet and one Oxycodone, that we’re aware of. They [his parents] checked on him around 1am, and again, he was doing fine. 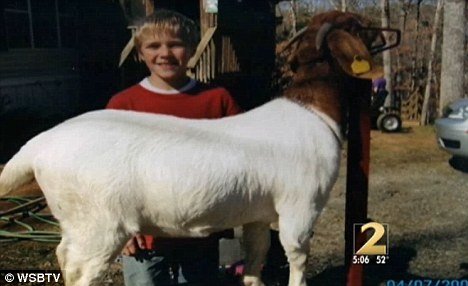 Ben Ellis, who was a freshman at Gilmer County High School, was the youngest of four children and was active in the Future Farmers of America, winning competitions for his goats

Ben Ellis, who was a freshman at Gilmer County High School, was the youngest of four children and was active in the Future Farmers of America, winning competitions for his goats.

Teacher Ashton Allen, who has taught Ben Ellis for two years in a row, told wsbtv.com: “He loved showing his goats more than anything. You could see it on his face when he walked into the show ring.

“He was the person I would always count on. Every time I would walk into class he’d be sitting here smiling at me. He was just so full of life and full of joy.”

School principal Erick Hofsteter was moved to tears by Ben Ellis’ death and said: “It serves as a reminder of just how fragile life can be. He was our friend. We’re going to miss him.”

The GBI is performing an autopsy and toxicology tests. Test results could take as long as three months.