Dominick Chilcott, the British ambassador in Iran claims the ruling regime at Tehran is likely to have supported an attack on the UK’s embassy in the country.

Dominick Chilcott told the BBC Iran is a country in which such action is only taken “with the acquiescence and the support of the state”.

Hundreds of protesters attacked the UK embassy in Tehran on Tuesday.

Diplomats working at the Iranian embassy in London have left Britain after being expelled. 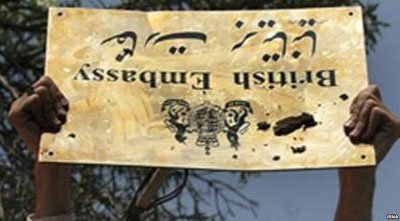 Dominick Chilcott, the British ambassador in Iran claims the ruling regime at Tehran is likely to have supported an attack on the UK's embassy in the country

The Iranian diplomats expelled from the UK flew out of Heathrow on a chartered Iran Air flight on Friday afternoon.

The Iranian diplomats’ expulsion was ordered by Foreign Secretary William Hague after the British embassy in Tehran was stormed on Tuesday.

Iran said it regretted the incident, which it described as “unacceptable behaviour by a small number of protesters”.

Dominick Chilcott, the newly appointed British ambassador to Iran, said the attack was likely to have had state backing.

“Iran is not the sort of country where spontaneously a demonstration congregates and then attacks a foreign embassy. That sort of activity is only done with the acquiescence and the support of the state.

“And there are a number of reasons why, with the benefit of hindsight, it’s very clear that this was a state-supported activity.”

Dominick Chilcott also said some within Iran’s ruling regime may have underestimated the British response.

“The risk is that certain people in the regime who liked the idea of confrontation, because they felt it would rally people to the flag, miscalculated how strong the response would be,” he said.

“They probably didn’t expect us to send home the Iranian embassy in London and, reading between the lines, you can see in the way they have responded to that move, some remorse in having provoked it. I think that might apply more generally too.”

“Something really bad happened when the Iranian authorities allowed those people to overrun our embassy compounds, and it is quite right that we have been very clear in our response – as have many other European countries who have withdrawn their ambassadors for consultations.

“It doesn’t mean we’re cutting off all diplomatic relations with Iran. It doesn’t mean we are in any way lessening our determination to try to find a diplomatic solution to the nuclear question, which is immensely important to Europe and the whole world, and we will continue to work tirelessly to find a negotiated solution.”

On Wednesday, Foreign Secretary William Hague told MPs: “If any country makes it impossible for us to operate on their soil, they cannot expect to have a functioning embassy here.”

He said there had been “some degree of regime consent” in the attacks on the embassy and on another UK diplomatic compound in Tehran.

William Hague also said all UK diplomatic staff in Tehran had been evacuated and the embassy closed.

He said relations between the UK and Iran were now at their lowest level, but the UK was not severing relations with Tehran entirely.

Germany, France and the Netherlands announced on Wednesday that they were recalling their ambassadors to Tehran for consultation, and Norway said it was temporarily closing its embassy there as a precaution.

Hundreds of protesters – whom Iran described as “students” – massed outside the embassy compound on Tuesday afternoon before scaling the walls and the gates, burning British flags and a car.

William Hague said the majority of those taking part had been members of a regime-backed Basij militia group.

He said the private quarters of staff and the ambassador had been ransacked, the main embassy office set on fire and personal possessions belonging to UK diplomats stolen.

The US, EU and UN Security Council also condemned the attacks.

Last week, the US, Canada and the UK announced new sanctions against Iran, including measures to restrict the activities of the Iranian central bank.

The UK said then it was severing all financial ties with Iran.

The move followed a report by the UN’s nuclear watchdog that said Iran had carried out tests “relevant to the development of a nuclear device”.

Iran denies the accusations, saying its nuclear programme is solely for peaceful purposes.

On Sunday, Iran’s parliament voted by a large majority to downgrade diplomatic relations with the UK in response to the recent action.