Juan Jose Padilla, a Spanish matador blinded in one eye after being gored during a bullfight announced today he will return to the ring as he made his first public appearance since the horrific incident.

Juan Jose Padilla, 38, was speaking at a press conference just six days after undergoing a crucial operation to repair nerve damage in the left side of his face, which was left paralyzed in the attack.

Bearing scars next to his jaw and left eye where Juan Jose Padilla was pierced by the bull’s horn, he said it was his dream to don the famous uniform once again and insisted he did not want pity.

“I do not want the fans to feel sorry for (me),” Juan Jose Padilla told media at Virgen del Rocio hospital in southern Seville before returning home.

“I will fight again dressed as a bullfighter because this is my dream to meet the fans,” Juan Jose Padilla added before referring to the motto “Strength Padilla”, which has flooded social networks in recent weeks. 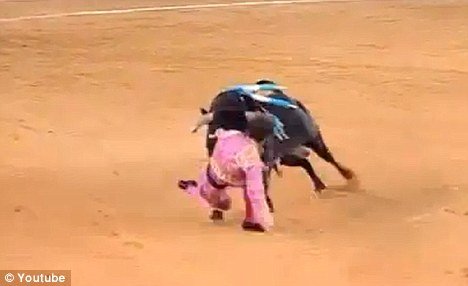 Juan Jose Padilla, a Spanish matador blinded in one eye after being gored during a bullfight announced today he will return to the ring as he made his first public appearance since the horrific incident

The crowds at the Zaragoza’s Fiestas Del Pilar bullfight at the Misericordia ring were left stunned when the bull’s horn pierced his jaw and emerged through his left eye socket in October.

With blood gushing from his head, Juan Jose Padilla was helped out of the ring screaming: “I can’t see, I can’t see.”

Juan Jose Padilla then underwent a life-saving five-hour operation to repair severe damage to his eye, bone, muscle and skin.

Juan Jose Padilla said he was feeling better than three weeks ago and was “very excited” about his recovery following his treatment under the direction of maxillofacial surgeon Alberto Garcia Perla.

The operation Juan Jose Padilla underwent last Tuesday aims to rebuild the facial nerve severed in the goring which left him with difficulties swallowing and talking.

Juan Jose Padilla will face a long rehabilitation process that will begin in a couple of weeks at a recovery centre.

It is hoped the operation will recover around 80% mobility in his face.

Juan Jose Padilla said: “I want to thank the Hospital Virgen del Rocio and the entire medical team for giving me the opportunity to return to normal life and giving me the hope of returning to the arena.”

Accompanied by his wife, Lidia, his parents and his attorney, Taurine Sanlúcar Diego Robles, Juan Jose Padilla was given a standing ovation before moving to his home in Sanlucar de Barrameda in Cadiz.

It is not the first time Juan Jose Padilla, a popular matador who has won many fans for his courage and willingness to face the toughest bulls, has been gored.

In 2001 Juan Jose Padilla suffered serious injuries to his neck during a fight in Pamplona.

The bull, called Marques and from the Ana Romero ranch, quickly took its revenge after Juan Jose Padilla slipped and fell in the sand after the placing of the banderillas (barbed sticks).

Doctors had initially thought the goring, of which footage exists on Youtube and was shown on Spanish TV channel Canal+ Toros, would be fatal.