A family of six is feared dead after a plane crashed into Arizona’ Superstition Mountains last night in a tragic Thanksgiving accident.

After the crash, the plane was split out, causing a massive fireball captured on video and seen for miles around, and left officials with little hope of finding survivors.

It is believed that the pilot has been collecting his children, with three understood to be aged between 5 and 9, for the Thanksgiving holiday and was returning home when the tiny two-engine plane crashed in the ominously-named mountain range.

There were three children and three adults on board, a spokesperson for Falcon Executive Aviation flight school in Mesa told CBS5. It is believed they are all be related. 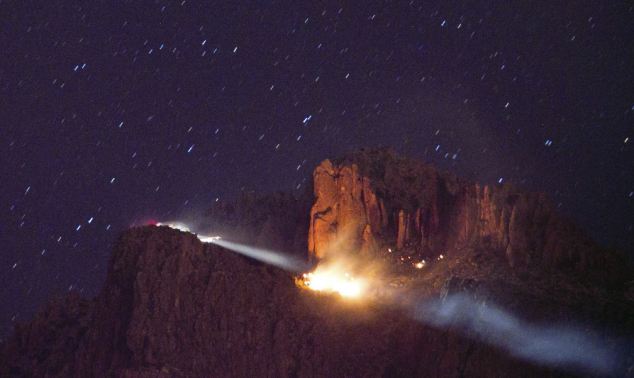 The pilot had flown into Falcon Field airport and was en route back home to Safford airfield, about 100 miles east of Phoenix, when he ran into trouble.

Pinal County Sheriff Paul Babeu told FOX 10 there are “multiple fatalities”. The body of a child between the ages of 5 and 9 has been recovered at the scene, he said.

Sheriff’s Office spokesman Elias Johnson said there appeared to be no survivors. The six casualties were all believed to be members of the same family, the LA Times reported.

The plane burst into flames after colliding with the mountains, which are 45 miles east of Phoenix, just below their peak, witnesses reported.

“This is some of the toughest country you can experience,” Elias Johnson said.

“That plane is all over the place up there.”

Emergency crews have begun the hike to access the wreckage in the rugged terrain to begin the search for possible survivors.

A 12-person rescue team began hiking to the site about 9:00 p.m., but the combination of the terrain and the darkness means that it will take some six hours until workers are able to reach the crash site.

Rescue crews were tonight trying to land helicopters in the mountainous area about 40 miles east of downtown Phoenix in order to search for survivors.

“The fuselage is stuck down into some of the crevices of this rough terrain, and we’re doing our best at this point in the darkness,” Paul Babeau said.

“This is not a flat area. This is jagged peaks, almost like a cliff-type rugged terrain.”

No survivors had yet been found, he said. But “we will search throughout the night”.

According to authorities, the private aircraft was a twin-engine Rockwell AC69.

The aircraft registered owner is Ponderosa Aviation Inc. of Safford, Arizona, according to FAA records.

A video uploaded to YouTube from a greyscale webcam shows a small white light moving from the left side of the screen to the right.

About 50 seconds into the footage the light disappears.

A few seconds later there is a sudden flash of light, then more light remains as the fires burn on the mountain.

A local resident took the video from his home in Gold Canyon, roughly seven miles away from the crash site, ABC News reported.

Graham said 911 calls began coming in around 6:30 p.m. on Friday after an explosion near the Flat Iron area close to Lost Dutchman State Park.

“People said it sounded like fireworks going off,” Graham said.

One witness told CNN that a mushroom cloud of flames lit up the evening sky.

Another local observer Ronnie Brant told KPHO TV the plane seemed to be having engine trouble.

Some witnesses said they heard a plane trying to rev its engines to climb higher before apparently hitting the mountains.

The Superstition Mountains’ elevation is about 5,000 feet at their highest level.

The photogenic area near Lost Dutchman State Park and the Superstition Wilderness is filled with steep canyons, soaring rocky outcroppings and is popular with hikers and horse riders.

Apache myth holds that the mountains contain a hole that is an entrance to the underworld.

Treasure hunters who frequent the area have been looking for the legendary Lost Dutchman mine for more than a century.