Home Business Apple’s biggest store in the world will be opened in NY Grand...

Apple is opening its next New York City store today – which is believed to be the tech giant’s biggest store in the world – in Manhattan’s Grand Central Station.

An online video appears to give a walk-through tour of the site, which Apple’s executives are expected to uncloak today ahead of an official opening on America’s biggest shopping day of the year – Black Friday.

According to 9to5mac, a five-minute clip uploaded to on YouTube on October 22, entitled Apple Store Grand Central, was shot before construction began in mid-August.

The behind-the-scenes glimpse indicates there is substantial work to be done between two stories on the north and northeast balconies of the terminal’s main concourse to get the store in shape for shoppers. 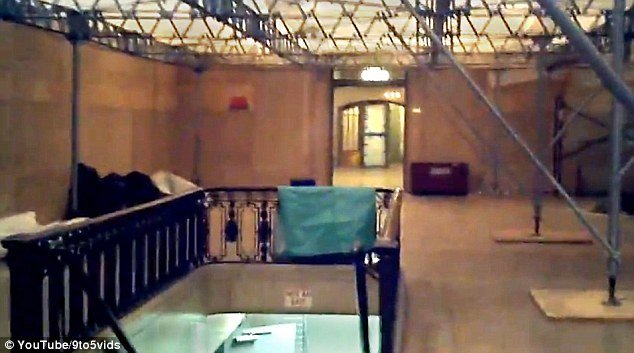 An online video appears to give a walk-through tour of the site, which Apple's executives are expected to uncloak today ahead of an official opening on America's biggest shopping day of the year - Black Friday

9to5mac reports Apple’ store will be the workplace of 300-plus employees.

Workers are expected to arrive tomorrow to remove several black boards that currently obstruct the store’s façade, preventing outsiders from evaluating what progress has been made – or speculating if an Apple Store is in the making at all.

It is likely the Grand Central Terminal store – Apple’s fifth in Manhattan and 358th in the world – will likely be one of its busiest.

The historic transportation and shopping hub, which opened in 1871, sees about 750,000 people each day.

But numbers can explode to one million daily visitors during the holiday season, with many commuters and tourists lurking around to dine or shop at its approximately 70 restaurants and retail stores.

The International Business Times suggests that Apple will forego its well-known all-white design to compliment the look and feel of Grand Central’s 19th century architecture.

“Tables and chairs resemble the train station’s sepia stones, while soaring ceilings and bright chandeliers give the space a luxurious feel,” reports the International Business Times.