Danielle Mitterrand, the former French First Lady and widow of Francois Mitterrand, has died at the age of 87.

Danielle Mitterrand died in Georges-Pompidou hospital in Paris after being taken ill on Friday, the French news agency AFP reports.

The former French First Lady died at 02:00 (01:00 GMT) on Tuesday, days after being placed in an artificial coma.

Former French President Francois Mitterrand led the Socialist party and served two terms as president of France, from 1981 to 1995. 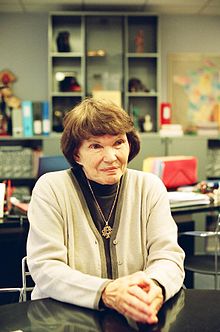 Resistance heroine and humanitarian, Danielle Mitterrand was never content with the ornamental role of a traditional French first lady, according to AFP.

Whether it was backing the Kurds or Tibetans or Cuban leader Fidel Castro, pleading for an equitable share-out of water resources or denouncing slavery, the causes that Danielle Mitterand defended ardently were numerous, the agency reported.

Born Danielle Gouze in the eastern town of Verdun, she joined the Resistance as a nurse aged only 17, when German troops occupied most of France in 1940.

On 27 October, 1944, she married Francois Mitterrand, a fellow Resistance member, whom she met when he was on the run from the Gestapo.

Danielle and Francois Mitternad had two sons, Gilbert and Jean-Christophe.

After Francois Mitterrand’s election in 1981, AFP said she preferred to shun the glittering receptions at the Elysee Palace, and devote herself to human rights work.

Former President Francois Mitterrand died of cancer in 1996, but his widow continued her political and human rights work. The organization Danielle Mitterand founded in 1986, France-Libertes, celebrated its 25th anniversary in October this year.