The driver of a U-Haul truck carrying beer kegs through a tailgating area before the Yale-Harvard game yesterday suddenly accelerated, fatally striking a 30-year-old Massachusetts woman and injuring two other women, police said.

New Haven Police spokesman David Hartman said that it is not yet clear why the driver sped up.

At least one eyewitness told police the driver pressed the pedal in annoyance that the women were not moving fast enough, the New Haven Register reported.

U-Haul truck, travelling at 35 mph, then crashed into other U-Haul vans in the lot, which is earmarked for fraternity Sigma Phi Epsilon members to have pre-game tailgating parties in before Yale home games.

A police source told the New Haven Register that the driver “maybe accidentally” hit the gas with some witnesses assuming he had intended to put his foot on the brake.

“I watched a woman die today,” one man told the New Haven Register, declining to give his name.

“It was totally an accident. Whether he was impaired is another question.” 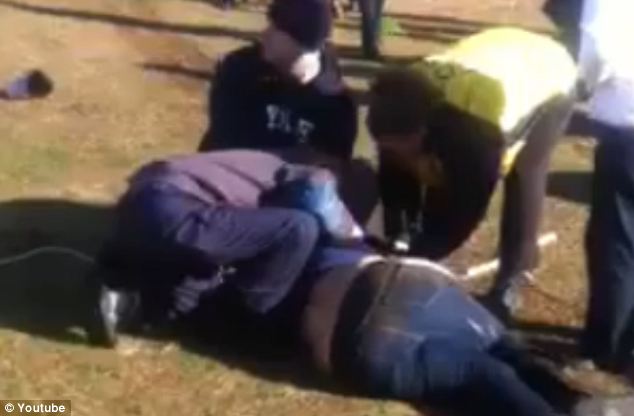 The driver of a U-Haul truck carrying beer kegs through a tailgating area before the Yale-Harvard game yesterday suddenly accelerated, fatally striking a 30-year-old Massachusetts woman and injuring two other women

The crash occurred at 9:49 a.m. and the Massachusetts woman, reportedly unconnected with Harvard or Yale, was pronounced dead at 10:16 a.m. at Yale-New Haven Hospital.

A second woman, believed to have suffered broken bones, was listed in critical but stable condition at the hospital. She is from New Haven and a student at the Yale’s School of Management, the Yale Daily News reported.

The third woman suffered minor injuries and is being treated at St. Raphael’s Hospital.

David Hartman said the driver was in police custody. Police have not yet released any identities.

Yale spokesman Tom Conroy told the Yale Daily News that the university “will be undertaking a full review of the policies and regulations relating to tailgating before athletics events”.

The parking lots around the stadium can be unruly and full of drunken revellers, fans and students have said.

The U-Haul truck had been driving through the Yale Bowl’s Lot D, the site of the Sigma Phi Epsilon tailgate.

Drew Marconi, the fraternity’s director of communications, did not confirm that the U-Haul was a Sigma Phi Epsilon vehicle, but said that they would cooperate with any police investigation.

“We’re deeply saddened by the events of today’s tailgate, and our thoughts and prayers go out to the victims and their families,” Drew Marconi said.

“Our leadership board and national representatives are currently working to understand the details of the situation and assess what has transgressed. We hope to know more soon.”

The fans had gathered for the 128th game of the Ivy League rivalry, with Harvard looking for its fifth straight win over Yale.

Three hours after the accident, the loud tailgating continued in the lot, with music blaring from large speakers and fans grilling hot dogs, sausage and hamburgers. Some students danced on top of other rental trucks.

A crowd of more than 50,000 people was expected to attend the event, known simply as “The Game”, and began congregating in the tailgating area around 8:30 a.m.

The accident scene was cordoned off by yellow police tape, and a dozen numbered evidence placards were on the ground.

The three rental trucks involved in the accident were still at the scene, stacked one against another from the collision. There were several kegs of beer inside each vehicle.

At halftime of the game, with Harvard leading Yale, 24-7, the public address announcer at Yale Bowl informed the crowd of the accident and the woman’s death, noting that it had been confirmed by the New Haven Police. He asked spectators to stand and observe a moment of silence.

The historic Yale-Harvard rivalry is an Ivy League tradition that dates back to 1875.