Hundreds of people were protesting outside the Kuwaiti Parliament, when dozens of them stormed the building late on Wednesday.

The protesters were demanding that Prime Minister Sheikh Nasser al-Mohammad al-Sabah step down.

Hundreds of demonstrators, including opposition lawmakers, have been protesting weekly outside parliament over alleged corruption.

According to some reports, riot police had beaten protesters using batons as they gathered outside parliament.

AFP news agency reports that at least 5 protesters were injured.

“Now, we have entered the house of the people,” said Mussallam al-Barrak, who was among those who led the protest against Sheikh Nasser, a nephew of the emir. 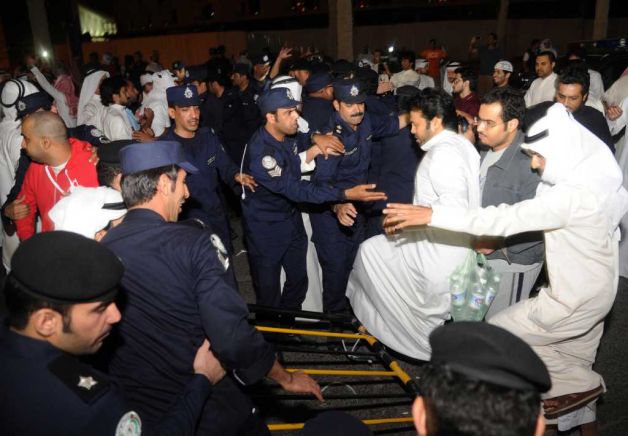 Hundreds of people were protesting outside the Kuwaiti Parliament, when dozens of them stormed the building

People broke open the gates to the parliament building and managed to enter the main chamber, where they sang the national anthem and then left a short time later.

According to eyewitness and protesters, guardsmen did not intervene when they entered the parliament building, stormed after protesters’ attempt to march on the prime minister’s house were blocked.

“Some people managed to get inside. No confrontation happened with the national guard who are guarding the building,” said eyewitnesses.

“People are asking for more reforms, and especially as recently the government has not been going with the spirit of the constitution, which some regard as the absolute minimum of democracy.”

As the crowd returned to the square outside, the protesters outside shouted: “The people want to bring down the head (of government).”

Kuwait’s parliament is one of the few elected bodies in the Gulf.

But opposition groups have escalated pressure on Kuwait’s leadership in recent months over claims of corruption and perceived attempts to roll back political freedoms.