Joe Amendola, Jerry Sandusky’s defense attorney, got a teenage girl pregnant when she was 17 and he was 49, according to a report.

According to The Daily newspaper, which quoted from documents of State College, Pennsylvania, Joe Amendola represented Mary Lavasile in an emancipation hearing in 1996 just weeks before her 17th birthday.

At about the same time, Mary Lavasile became pregnant with Joe Amendola’s child, her mother, Janet, told The Daily.

Janet Lavasile said she thought Joe Amendola was a “mentor” figure to her daughter and did not realize the extent of their relationship.

“She met him through the school district; she was interested in the law,” said Janet Lavasile. 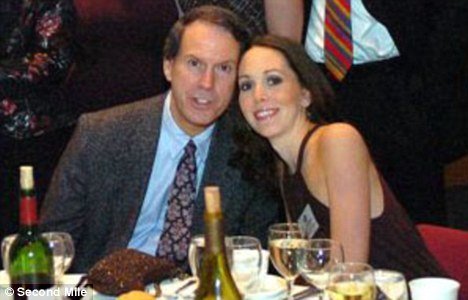 Joe Amendola is said to have married Mary Lavasile in February, 2003, but they split after having two children together

Joe Amendola is said to have married Mary Lavasile in February, 2003, but they split after having two children together.

“Joe is a very good father and has loved his two children very much, and that’s the most important thing for me right now,” said Janet Lavasile.

Joe Amendola has gone on the offensive for Jerry Sandusky to claim the one-time heir apparent to Joe Paterno was just “horsing aroun”’ with young boys and wasn’t guilty of sexual abuse.

The lawyer apparently gave his blessing to his client to agree to a phone interview with NBC sports presenter Bob Costas on Monday night when Jerry Sandusky acknowledge he did engage in inappropriate behavior with boys, including taking showers with them.

Jerry Sandusky insisted, however, that he was not sexually attracted to children.

When Bob Costas asked Joe Amendola if he would leave his children alone with Jerry Sandusky, the lawyer answered: “Yes, without hesitation.”

On her Facebook page afterwards, Mary Amendola wrote: “OMG. Did Joe just say that he would allow my kids to be alone with Jerry Sandusky?”