At least 11 people, including two children and three women, are reported to have been killed in the Yemeni city of Taiz, during a clash between government forces and opposition supporters.

According to medical officials, dozens of others were wounded, including civilians, during clashes.

The upsurge in fighting coincides with the visit to Yemen of a United Nations envoy, Jamal Benomar, who is pressing for a transition of power to end months of conflict. 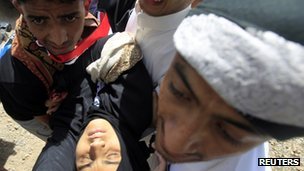 At least 11 people, including two children and three women, are reported to have been killed in the Yemeni city of Taiz, during a clash between government forces and opposition supporters

Taiz, Yemen’s second biggest city, is about 200km (120 miles) south of the capital, Sanaa. It has been a hotbed of anti-Saleh protests in recent weeks.

Residents of Taiz say the latest fighting began during protests on Thursday, when one person was killed and several others were injured.

The security forces then began shelling two residential neighbourhoods during the night.

The two districts, Zaid al-Moshki and al-Rawda, along with Freedom Square, have been at the forefront of anti-government demonstrations in Taiz.

Reports say three women and two children, including a nine-year-old boy, were among the 11 killed on Friday.

In Sanaa, Yemeni capital, tens of thousands of anti-Saleh protesters attended prayers on a main road. Some demanded the president be tried for what they called his crimes against the Yemeni people.

Separate prayers were held by thousands of Ali Abdullah Saleh supporters in the capital. There were no reports of violence in Sanaa.

Jamal Benomar, the UN envoy, arrived in the Yemeni capital, Sanaa, on Thursday and has been meeting government and opposition figures to press for an end to the violence.

A UN spokesman said Jamal Benomar was there to seek “an inclusive transition process that meets the needs and aspirations of all Yemenis”.

President Ali Abdullah Saleh has accepted a peace plan put forward by Gulf Arab countries, under which he will step down in return for immunity from prosecution.

However, Ali Abdullah Saleh has repeatedly failed to implement the agreement or follow through on his promise to leave office.

Meanwhile, clashes have escalated between his supporters and anti-Saleh factions, which include Yemeni tribal groups and army defectors.

The UN Security Council has called on Ali Abdullah Saleh end the violence against protesters and step down immediately.