Home Breaking News LOT Boeing 767 with 230 aboard made a crash landing at Warsaw...

A Boeing 767 flying from Newark operated by Polish LOT airlines made an emergency landing at Warsaw airport today.

The aircraft, which was flying from Newark, New Jersey, with around 230 people on board made a belly landing at Warsaw’s airport on Tuesday after reported trouble with landing gear.

Captain Tadeusz Wrona radioed ahead to let the control tower know there was a problem with deploying the landing gear. After several attempts, however, it was decided that the aircraft would have to come down without any wheels.

While the plane circled the Warsaw for an hour, dumping excess fuel and repeatedly trying to solve the problem, ground crews prepared for a crash landing, closing the airport to all other flights and clearing nearby streets. Fire crews also sprayed the runway with foam in a bid to prevent a fire from breaking out.

Captain Tadeusz Wrona lifted the nose of the aircraft slightly as it approached the tarmac. As it slid along the runway, smoke billowed from the undercarriage followed by bright flashes from under the engines.
When it came to a halt, fire engines that were waiting along the sides and at the end of the tarmac rush towards the plane, dowsing it with foam.

Meanwhile, passengers are quickly ushered off down the inflatable chutes on either side.
News channels and TV crews were on the scene soon after learning about the impending disaster and the incredible landing was beamed live around the world.

Nearby streets were cleared and a landing strip was especially prepared at the airport for the crash landing.
Staff worked hard to find a technical solution to the landing gear problems while in the air, but eventually had to try to land.

It was reported that nobody was injured, passengers or crew members.

“All safety procedures worked perfectly fine and, thanks to this, nobody was injured.” 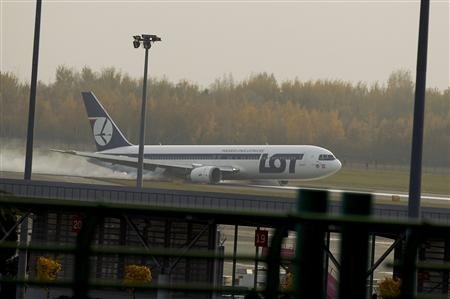 Polish television footage showed the plane landing on its belly, with a few sparks flying as the craft hit the runway which had been covered with flame retardant foam.

There was no blaze reported but firefighters hosed the plane with water and foam as a precautionary measure.

LOT aircraft passengers were evacuated from the plane, which had circled above Warsaw before the crash landing. Warsaw airport remained closed for all other flights.

Warsaw airport has been closed until 8:00 a.m. on tomorrow. Poland’s President Bronislaw Komorowski congratulated and thanked the pilot, Captain Tadeusz Wrona, and the rest of the crew for their successful landing.