Qantas airline announced that 68,000 passengers were affected by its grounding of 108 aircraft in 22 cities worldwide due to the industrial action yesterday.

Australian airline also announced it would lock out staff involved in industrial action, after months of strikes.

As a result, the pilots union has threatened legal action against the move.

Australian Prime Minister Julia Gillard has called for an end to industrial action which has seen Qantas ground all its international and domestic flights.

Prime Minister said the government had applied to regulator Fair Work Australia, “the industrial umpire”, to try to get planes back in the air.

Julia Gillard also said she was concerned about damage that could be caused to the national economy. 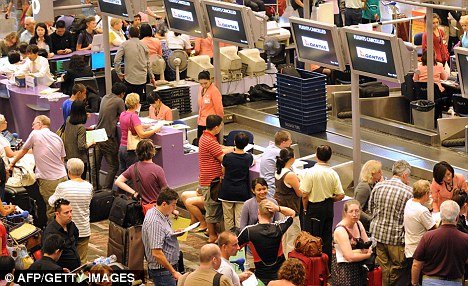 68,000 Qantas passengers were affected by airline grounding of 108 aircraft in 22 cities worldwide due to the industrial action yesterday

It was reported that among thousands of stranded passengers were 17 world leaders attending the Commonwealth summit in Perth, but PM Julia Gillard said they had found alternative flights.

Fair Work Australia reconvened an emergency panel at 14:00 (03:00 GMT) on Sunday, after an earlier hearing was adjourned in the early hours of the morning.

Fair Work Australia can decide whether to order an end to industrial action by both unions and Qantas airline management.

Alan Joyce, Qantas CEO said his planes could be in the air again by late Sunday if the panel ordered a termination of all industrial action, but he warned an order to simply suspend it – as the unions were seeking – would not be good enough.

Qantas airline – the world’s 10th largest – has been hit by a series of costly strikes and other industrial action, which the company said was costing A$15 million ($16 million) a week.

It was reported that pilots have been engaged in protracted talks with management over wages, conditions and outsourcing of jobs to Asia, but they have yet to walk off the job – unlike baggage handlers, engineers and ground staff.

“Pilots have made it clear from the start that we would not take industrial action that disrupts passengers. We have stuck to that to this day,” Richard Woodward said.

“Alan Joyce, on the other hand, has opted to disrupt passengers in the most devastating way possible.

“Pilots have not been on strike and we are not seeking anything that would damage profitability.”

A statement by the Australian airline said all employees involved in industrial action would be locked out from Monday evening and flights grounded from 06:00 GMT on Saturday with aircraft currently in the air would complete their flights, but there would be no further departures.

Qantas airline also issued a statement on its Facebook page saying customers booked on its flights should not go to the airport until further notice. Qantas said a full refund would be available to those affected.

Relations between the unions and Qantas airline management started deteriorating in August after the company announced plans for restructuring and moving some operations to Asia.

Qantas airline has a 65% share of the domestic Australian market, but has been making heavy losses on its international flights.

It was reported that restructuring is expected to mean the loss of 1,000 jobs from its 35,000-strong workforce.