A massive 7.2-magnitude earthquake struck province of Van in eastern Turkey on Sunday, collapsing about 45 buildings according to the deputy prime minister.

So far, only one person was found dead and immediately confirmed, but experts estimated that up to 1,000 people could have been killed.

The worst damage was caused to the town of Ercis, in the mountainous eastern province of Van, close to the Iranian border. The city of Van also suffered substantial damage.

Besir Atalay said authorities had no information yet on remote villages, adding that the governor was now touring the region by helicopter to assess damage. 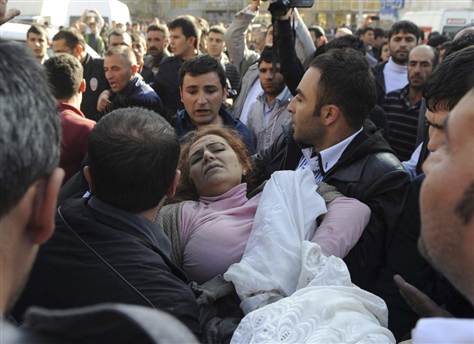 The Turkish Red Crescent said its rescuers pulled several injured people out of the collapsed dormitory in Ercis, which sits on a geological fault line

The earthquake’s epicenter was in the village of Tabanli.

Turkish authorities did not provide a casualty figure for the moment, but the Kandilli observatory, Turkey’s main seismography center, said the quake was capable of killing many more people.

“We are estimating a death toll between 500 and 1,000,” Mustafa Erdik, head of the Kandilli observatory, told a televised news conference.

Mustafa Erdik estimate was based on the structure of the housing in the area and the strength of the quake.

The Turkish Red Crescent said its rescuers pulled several injured people out of the collapsed dormitory in Ercis, which sits on a geological fault line.

Prime Minister Tayyip Erdogan was reportedly heading to Van to see the damage.

At least 50 injured people were treated in the courtyard of the state hospital in Van, a bustling city with many apartment buildings, according to the state-run Anatolia news agency.

“There are so many dead. Several buildings have collapsed. There is too much destruction.”

Van province has a population of around 1 million people.

Serious damage and casualties were also reported in the district of Celebibag, near Ercis.

“There are many people under the rubble.”

“People are in agony, we can hear their screams for help. We need urgent help.”

Some houses also collapsed in the province of Bitlis, where at least one person, an 8-year-old girl was killed, authorities said. The quake also toppled the minarets of two mosques in the nearby province of Mus, reports said.

Van’s airport was damaged and planes were being diverted to neighboring cities, NTV reported.

Panicked people spilled into the streets as rescue workers and residents using their bare hands and shovels struggled to find people believed to be trapped under collapsed buildings, television footage showed.

Several Cabinet ministers headed to the area as authorities mobilized rescue teams across the country.

The quake had a depth of 20 kilometers (12.4 miles), which is relatively shallow and could potentially cause more damage.

Earthquakes are frequent in Turkey, which is crossed by fault lines.

In 1999, about 18,000 people were killed by two powerful earthquakes that struck northwestern Turkey. Authorities blamed shoddy construction for many of the deaths.