Gilad Shalit, the Israeli soldier who was Hamas prisoner for five years in Gaza, has been released today.

Sergeant Gilad Shalit was freed as part of an exchange between Israel and Hamas. In return, Israel will release 477 Palestinian prisoners as part of the deal.

The Israeli soldier was taken across the frontier from the Gaza Strip into Egypt’s Sinai peninsula, where he was handed over to Egyptian officials. 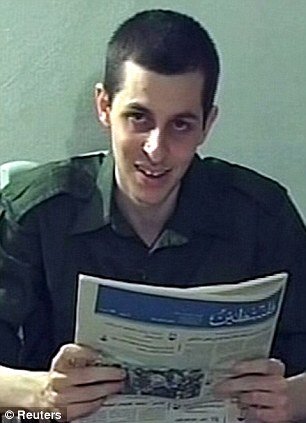 Gilad Shalit, the Israeli soldier who was Hamas prisoner for five years in Gaza, has been released today in a thousand-for-one deal

Gilad Shalit will be taken to Israel’s Vineyard of Peace border crossing a short distance away down a desert road.

Early in the morning, convoys of white vans and trucks transported hundreds of Palestinian prisoners to the locations in the West Bank and on the Israel-Egypt border where they were to be freed.

Some of the Palestinian prisoners were due to be taken to the Sinai and handed over to Egyptian officials for transfer to the Gaza Strip, which is run by Hamas. Other prisoners were to be released in the occupied West Bank.

Among the Palestinian prisoners released some were serving life sentences for carrying out deadly attacks.

It is expected in about two months, another 550 Palestinians are to be released in a second stage of the Egyptian-brokered agreement.

The Israeli and Hamas exchange involves a delicate series of staged releases, each one triggering the next.

Gilad Shalit has been popularly portrayed in his country as “everyone’s son” and opinion polls showed that an overwhelming majority of Israeli backed the thousand-for-one deal.

Sergeant Gilad Shalit appeared to be healthy in the only time he has been seen in captivity – in a brief and scripted 2009 video released by Hamas – he was denied all visits, including by the Red Cross, and the state of his mental and physical health is unclear.

The exchange deal received approval from Israel’s Supreme Court last Monday after it rejected petitions from the public to prevent the mass release of prisoners, many of them serving life sentences for deadly attacks.

In June 2006, Gilad Shalit was abducted by Hamas militants who tunneled into Israel from the Gaza Strip and surprised his tank crew, killing two of his comrades.

After Gilad Shalit was seized, Israel, which withdrew troops and settlers from Gaza in 2005, tightened its blockade of the coastal territory.

The Israeli deal with Hamas (a group classified by the United States and European Union as a terrorist organization because of its refusal to recognize Israel and renounce violence) is not expected to have a direct impact on efforts to revive Middle East peace talks.

Palestinian President Mahmoud Abbas, a Hamas rival, has been pursuing United Nations recognition of Palestinian statehood in the absence of negotiations with Israel that collapsed 13 months ago in a dispute over settlement-building in the occupied West Bank.

In the morning, crowds were gathered in both Gaza and the West Bank awaiting the return of their prisoners.

Gilad Shalit will be flown by helicopter to an air base in the centre of Israel, where soldier will be greeted by Prime Minister Benjamin Netanyahu and reunited with his family. Then Gilad Shalit will fly to his home in northern Israel.

There were some concerns in Israel about the repatriation of captured soldiers and that the country is paying a high price for the release of Gilad Shalit.

Israeli PM Benjamin Netanyahu wrote in a letter to bereaved families: “I understand the difficulty in accepting that the vile people who committed the heinous crimes against your loved ones will not pay the full price they deserve.”