Sara Leal is said to have been in hiding since news broke of her alleged sexual liaison with actor Ashton Kutcher on the weekend of the actor’s sixth wedding anniversary.

Yesterday, Sara Leal was pictured stepping out for the first time since the scandal broke.

Sara Leal, 23, looked in a sombre, serious mood as she ran errands in Newport Beach.

Sara Leal was pictured in Newport Beach, California, for the first time since news of her alleged “liaison” with Ashton Kutcher broke

With her long blonde hair loose around her shoulders, Sara Leal sported tight blue jeans and a black cropped sweater and gold chain as she strolled through the California town.

She wore a pair of sunglasses, but still seemed eager to hide, at one point trying to conceal her face with her hand.

Sara Leal has yet to speak publicly about the alleged incident but is reported to have already retained a high powered attorney.

Her lawyer has so far declined to respond to any media calls about his client. 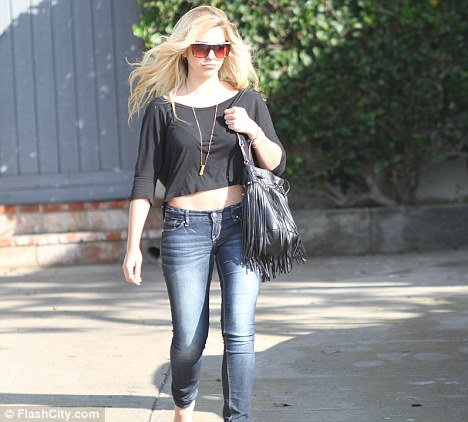 Sara Leal is allegedly letting it be known that she won’t “spill the beans” on Ashton Kutcher for less than $250,000, but is hoping she will receive a similar offer from Kutcher to fade away.

Sara Leal met Ashton Kutcher while partying at the Fluxx nightclub in San Diego on his wedding anniversary weekend.

Ashton Kutcher’s wife, Demi Moore was thousands of miles away in New York promoting a film, while he was reported to be picking out girls who were “hot tub worthy or not”.

Sara Leal, who is said to be “heavily involved” in the club scene, then joined Ashton Kutcher in his hotel hot tub before the alleged sexual encounter took place.

According to her now deleted Facebook page, Sara Leal, who went to school in Texas, is a model and aspiring director and has been shopping a movie called Runaway, without much success.

Meanwhile, Ashton Kutcher and Demi Moore put on a show of unity last week when they both attended the Kabbalah Centre in Los Angeles wearing their wedding rings.