A power cut could have prevented a shark spotter from sounding a warning alarm just before Michael Cohen was savaged by a great white off the coast of Cape Town in South Africa.

The shark spotter is thought to have seen Michael Cohen, the 43 year-old British swimmer enter the water and attempted to warn him of danger – but the siren didn’t work because of a city-wide power cut, it has been reported. 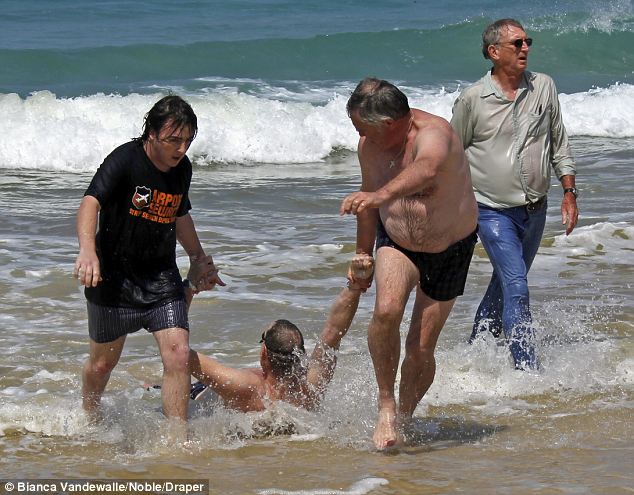 Michael Cohen was dragged on to Clovelly beach near Fish Hoek , then he was airlifted to hospital and is in a critical

An official incident report from the City of Cape Town claimed there was an electricity failure with the power company Eskom, according to South Africa’s Daily News website.

“At around 12.25 p.m. (on Wednesday), the mountain shark spotter saw a swimmer enter the water near the Clovelly Corner area.

“The spotter tried to sound the alarm, but due to an Eskom-related city-wide electricity failure, the alarm did not sound.”

The power company, Eskom was unable to comment as its officials said they were unaware of the City of Cape Town’s incident report.

But a company spokeswoman confirmed a power cut lasted for two hours, starting from just before 11:00 a.m. to shortly after 1:00 p.m. The power cut was apparently caused by a trip on the power line supplying Cape Town.

However, Eskom was unable to comment on the possible impact this had on the shark alarm as they unaware of the authority’s incident report.

Two men who dragged Michael Cohen to shore described how the creature swam around them as if to distract the 12 feet (4 m) Great White shark, which appeared to be preparing for a second strike.

Michael Cohen, who lost his right leg and part of his left foot, yesterday remained in a critical condition in hospital.

Michael Cohen, a British accountant, had ignored warnings of a shark in the area before taking to the water off Fish Hoek beach.

Yesterday, passers-by Hugh Till, 66, and Douglas Drysdale, 61, told how they ran into the blood-clouded surf to help pull Michael Cohen to safety after watching the attack.

“As Douglas and I were pulling him in towards the shore, the seal frolicked nearby, and kept swimming past us, it seemed rather agitated.

“It occurred to us afterwards how unusual it was for a seal to stick around in an area where a shark is, or where there is blood.

“It really did feel to us as though he was offering support to us, or the swimmer, and was prepared to act as a diversion if the shark went after us as well,” Hugh Till said.

Hugh Till was in the area with his friend Douglas Drysdale trying to spot whales when they saw the shark looming towards Michael Cohen, who was swimming a few yards from the beach.

The pair stopped their car and ran to shout warnings, but it was too late, leaving them to watch helplessly as Michael Cohen was pulled under.

Even though the shark remained in the area, possibly preparing for a second strike, Hugh and Douglas plunged into the water to help in the efforts to drag Michael Cohen to safety.

Prof. Andrew Nicol, who operated on Michael Cohen, said he had needed seven litres of blood on arriving at hospital.

Professor had fought to save one of the Michael’s legs, even though it was badly bitten, because he had lost the other leg. Michael Cohen’s femoral artery and vein were both torn – usually a fatal injury – and Prof. Nicol praised the life-saving first-aid efforts by a member of the beach’s shark-spotting team.

“The tourniquet resulted in the almost complete stopping of blood loss from the thigh and I just want to commend the people giving first aid on the beach for saving the life of this patient.”

“Self-made improvised tourniquets don’t tend to work and are frowned on in medical literature, but this really was life-saving. If the femoral artery and vein are both severed you don’t tend to make it into hospital alive,” Prof. Nicol said. 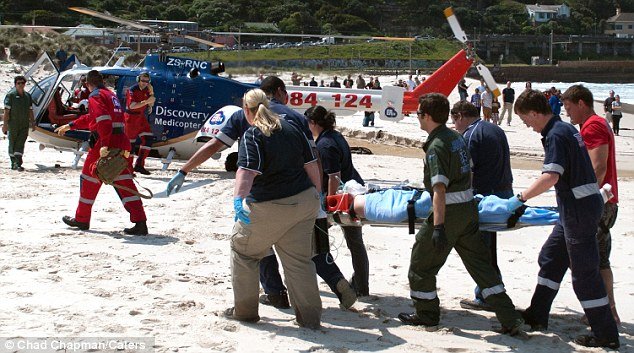 Michael Cohen, who has lost his lower right leg and left foot, was carried from the beach by members of the Fish Hoek emergency services to a waiting helicopter

Michael Cohen is a Canadian-born accountant, who has a British passport and lived in London before moving to South Africa. He had taken to the water even though the beach was closed after shark sightings.

Michael Cohen was said to be a regular swimmer at the beach, who had previously ignored warnings to stay out of the water.

The site of the attack is close to one of the highest populations of Great White sharks in the world, and has seen a number of deaths and injuries to swimmers and surfers.