Red tide is a common name for a phenomenon also known as an algal bloom (large concentrations of aquatic microorganisms), an event in which estuarine, marine, or fresh water algae accumulate rapidly in the water column and results in discoloration of the surface water. It is usually found in coastal areas.

When the algae are present in high concentrations, the water appears to be discolored or murky, varying in color from purple to almost pink, normally being red or green. Not all algal blooms are dense enough to cause water discoloration, and not all discolored waters associated with algal blooms are red. Additionally, red tides are not typically associated with tidal movement of water, hence the preference among scientists to use the term algal bloom.

“Red tide” is a colloquial term used to refer to a natural phenomenon known as a “harmful algal bloom” or “HAB”. The term “red tide” is being phased out among researchers for the following reasons:

1. Red tides are not necessarily red and many have no discoloration at all.

2. They are unrelated to movements of the tides.

3. A wide variety of algal species are known as bloom-formers.

The reaction is similar to the “glow” that fireflies use to attract prey or mates. Many undersea organisms “glow”, especially creatures that live at depths where light from the surface is less likely to penetrate.

The spellbinding sight was captured at Moonlight Beach in Encinitas, California, yesterday. The night-time glow is a side-effect of blooming red algae, known as red tide, which can turn entire beaches scarlet and murky during the day. 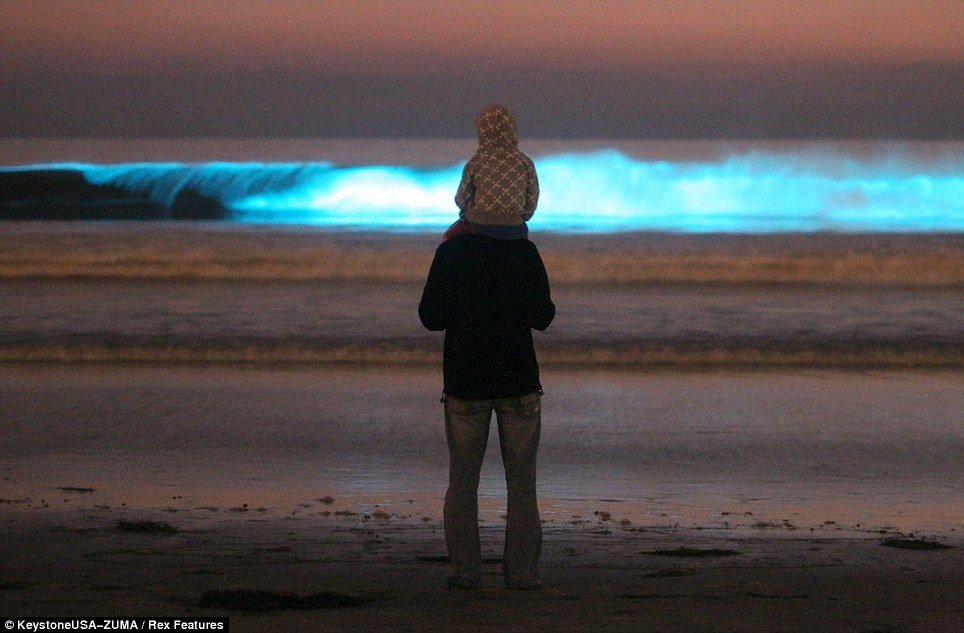 Michael Dermyer and his 5 year-old son Colin watching the waves glow neon blue from the red tide at Moonlight Beach in Encinitas, California

The smell of decay, caused by rotting kelp, plankton and fish often accompanies the event as the red algae starves the water of oxygen and light. By night, there is an increase in microscopic plankton called dynoflagellates, which glow in the dark when disturbed by currents or waves.

Beaches off the coast of Sarasota and Charlotte counties have tested positive for red tide, the Florida Fish and Wildlife Conservation Commission reported this week.

Further testing is scheduled for this week.

The toxic algae causes coughing in humans and kills marine life. Records of massive fish kills date back hundreds of years. The last major occurrence formed in 2006, wreaking havoc from north of Tampa Bay down to Naples.