The 9/11 commemoration ceremony began exactly as it did on that fateful date 10 years ago. 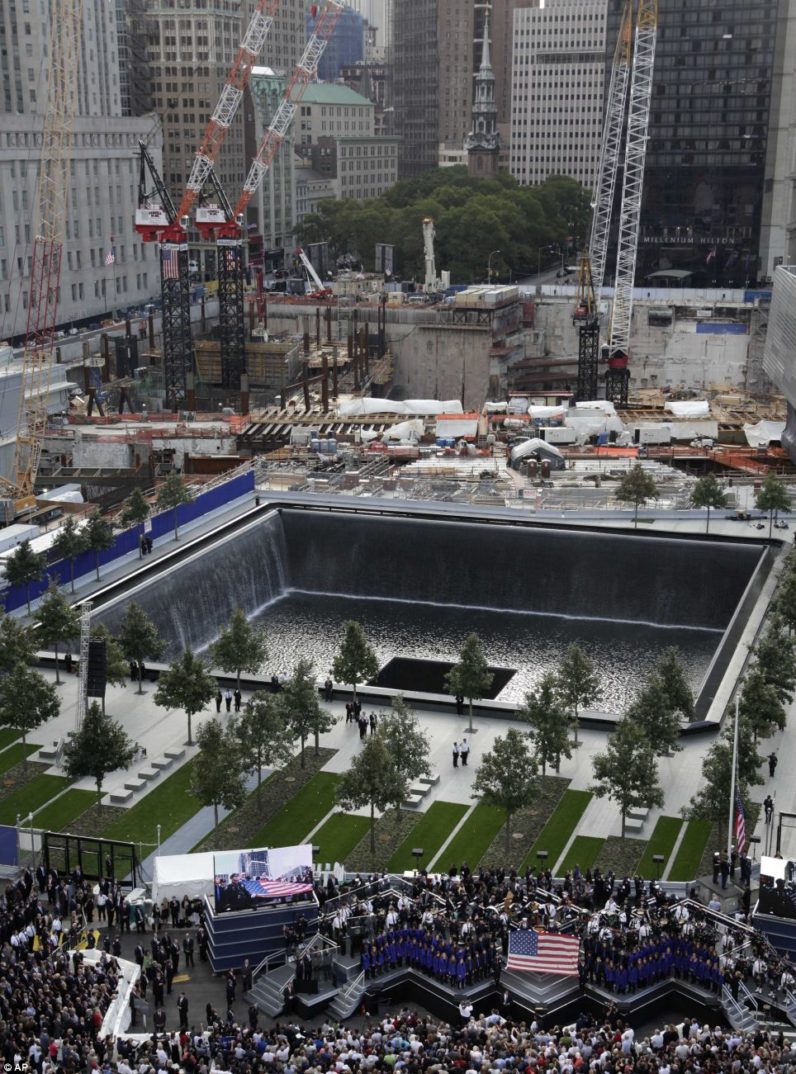 The sound of water falling 30 ft to the reflective pools below echoed around the glass cladding of the replacement towers rising around Ground Zero, creating the illusion of hundreds of people chattering.

Each one coming there brought with them the memory of a father, wife, son – some in physical form like the woman who carried aloft a series of photographs of a man cut into shapes that spelled: “I love daddy”. Others wore T-shirts with printed photos of their loved ones, or held up placards showing a husband at his college graduation, a daughter smiling broadly, with the words: “Never forgotten”.

It took 4 1/2 hours to read out in alphabetical order the names of the victims. Those with a surname starting with “A” alone took almost 10 minutes – all 108 of them. 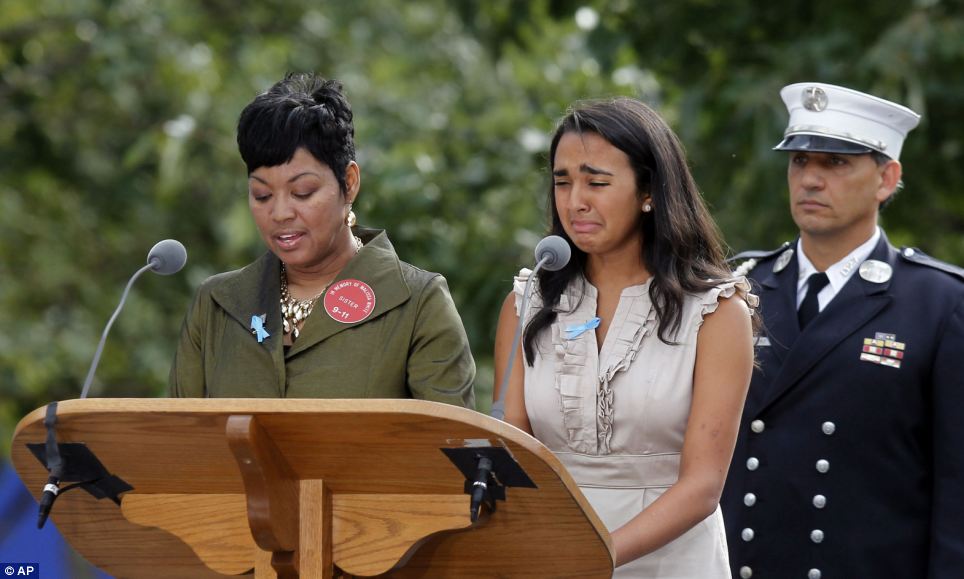 9 /11 commemoration 2011: many relatives struggled to keep their composure, voices cracking, as they read out the name of their own loved-one

Many relatives struggled to keep their composure, voices cracking, as they read out the name of their own loved-one. Strangely, one of the calmest speakers was also one of the youngest: a 10-year-old boy took the stage and said, without a glitch: ” I wish I’d known you better, but I was nine months old when you died. Everybody says you were a great guy. I love you Dad.”

Gordon Aamoth was the first of the 2,977 to be proclaimed. His friends called him “Gordy”. He was a keen athlete and captain of his high-school football team, and on the day before he died, aged 32, he clinched the largest deal of his career as an investment banker. He came to the World Trade Centre that morning to announce his success. 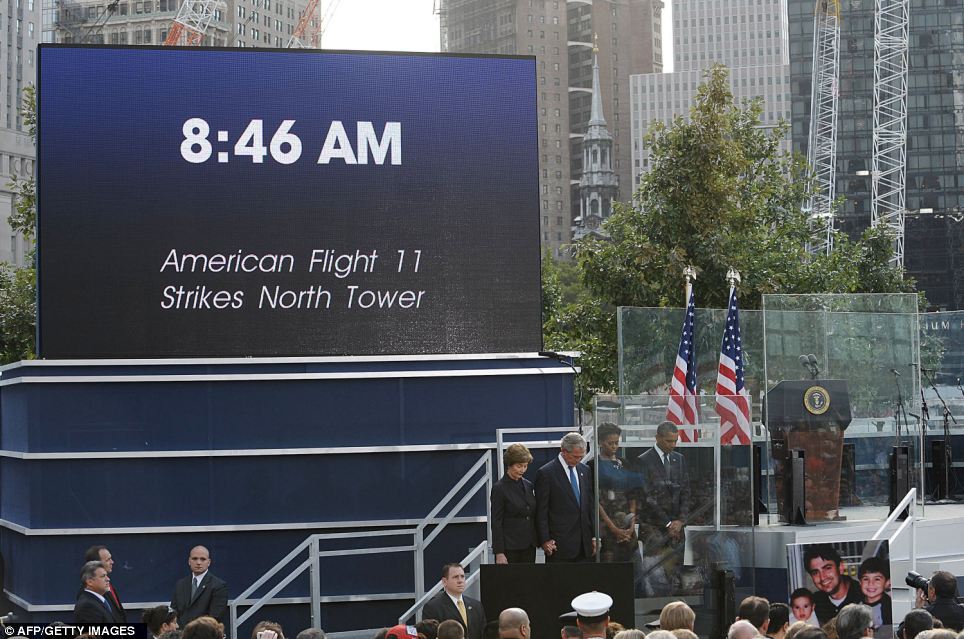 9/11 commemoration ceremony 2011: a minute of silence was held at 8:46 a.m. to mark the instant the first plane went into the North Tower

The very last name was Igor Zukelman. He arrived in New York in 1992 from his native Ukraine and built a new life for himself in a financial company. Igor used to boast to friends that from his 97th floor office in the Twin Towers you could see the whole of New York City, and he became an US citizen just months before he died, aged 29. He left behind a son, then aged three.

For the first time, Presidents Barack Obama and George W. Bush were united at Ground Zero – Bush having declined an earlier invitation to appear here after the killing of Osama Bin Laden.

Barack Obama read from Psalm 46 – “God is our refuge and strength” – after a minute’s silence was held at 8:46 a.m. to mark the instant the first plane went into the North Tower. The president was standing just in front of the spot where the tower used to stretch far up into the sky. 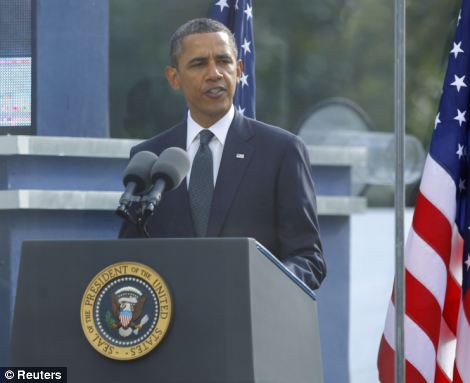 In his oration, George W. Bush turned to Abraham Lincoln for inspiration, reading a letter his predecessor sent to a mother of five sons who died in the Civil War. “I feel how weak and fruitless must be any words of mine which should attempt to beguile you from the grief of a loss so overwhelming,” Lincoln wrote.

Both George W. Bush and Barack Obama spoke from behind bullet-proof glass screens. That was a sharp reminder that the wound to America’s sense of security that was inflicted 10 years ago has yet to heal.

Away from Ground Zero, smaller gatherings marked aspects of the 9/11 tragedy in their own personal ways. Further uptown, at a fire station on 48th Street, firefighters and bereaved families remembered the firefighters of Engine 54, Ladder 4. Every member who reported for duty that day died, 15 in all.

Among those at the ceremony yesterday was retired fire chief Joe Nardone, commander on 9/11. He said it was a day for remembering “broken hearts and unspeakable horrors”.

In a field near Shanksville, Pennsylvania, where president Barack Obama travelled from Ground Zero to lay a wreath, thousands of people marked a moment of silence at 10:03 a.m., the moment United flight 93 flew into the ground after 40 passengers and crew lost their battle to seize control of the plane from the hijackers.

Sorrow filled the speeches in Shanksville but also celebration, at times marked with jingoism, for the “extraordinary heroism” of the 40 passengers and crew who prevented the hijackers going on to attack the Capitol in Washington.

Jason Cassidy, a metalworker, came from Baltimore because he felt it was important to honour the dead. But he was frustrated at the tone of some of the speeches, which he felt cast the resistance of the passengers and crew to the hijackers as a justification for a wider war.

“We don’t forget that day because we’re still living it. It’s not just history, it’s now. Out of that day, a lot of people have died. Thousands more Americans. Thousands in Iraq and Afghanistan,” he said.

“There are not enough people asking the question whether our response to what happened here has made it more not less likely we’ll be attacked again.”