The 9/11 tragedy from World Trade Centre has taken a heavy toll on the health of those who tried to rescue people from the burning buildings, those who took part in the clean-up, and those who lived near the site, research shows.

The rescuers who endangered their lives trying to save people have paid a long-term price: a 19% higher risk of cancer as a result of exposure to toxic fumes, according to a study published in a special The Lancet series to mark the 10th anniversary of the atrocity.

Other research in the series reveals the scale of mental and physical damage suffered by rescuers and witnesses.

Dr. David Prezant, chief medical officer of New York City fire department, and colleagues studied the firefighters, together with others from the Albert Einstein College of Medicine at Yeshiva University, and Montefiore Medical Centre, New York. 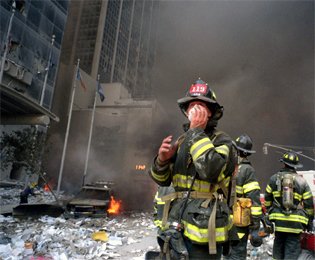 The rescuers at 9/11 WTC are at 19% higher risk of cancer as a result of exposure to toxic fumes, according to a study published in a special The Lancet series to mark the 10th anniversary of the atrocity.

“In the years following the disaster, the firefighters began to ask about cancer. The World Trade Centre fire was like no other they had encountered,” said Dr. Prezant.

“Firefighters are not environmental scientists, but they have the common sense test,” Dr. Prezant told the Guardian.

“What they said after coming out of those buildings after participating in the rescue and recovery effort was not just that the magnitude was great; they felt they were affected in a different way.

“Most firefighters have learned there are different smells to fires. They repeatedly said to us that this area smelled different. They said this was unlike any other firefight we’ve had before.

“We have a unique group of people. On 9/11 the firefighters ran into these towers, many of them after the south tower had collapsed, with nothing in their minds except saving everyone who was in there. We concentrate on the nearly 3,000 people who died there and the 343 firefighters who died that day, as we should, but we should never forget that 20,000 to 30,000 people were evacuated from that building because of the heroic efforts of these responders.

“In subsequent years they did voice concern, asking: <<What’s going to happen to me?>>. From day one we have said we will find out and we will provide you with the services necessary to help you.”

“One of the strengths of the study is that every firefighter who was there on September11, 2001 has had many health checks since,” Dr. Prezant added.

The researchers’ efforts to avoid an over-screening bias have brought the percentage estimates down. Originally they found an increase of 32%.

The cancers are various, but the most common were those of the skin, prostate, thyroid and non-Hodgkin’s lymphoma. The authors say a link between exposure to the pollutants given off by the World Trade Centre and cancer is biologically plausible because “some contaminants in the WTC dust, such as polycyclic aromatic hydrocarbons, polychlorinated biphenyls, and dioxins, are known carcinogens.”

Dr. James Melius of the New York State Labourers’ health fund calls for inclusion of cancer in the government-funded medical programme for firefighters.

“Waiting to do so until definitive cancer studies have been completed (probably many years from now) would be unfair and would pose a hardship for workers who willingly risked their health by responding without hesitation to the WTC crisis,” Dr. Melius said.

So far, rescue workers and civilians exposed to the dust have lower death rates than other comparable groups in New York, according to another study. But researchers say that is not surprising, because most were employed or volunteers – both groups that generally have better health – and the illnesses they might succumb to as a result of 9/11 generally do not cause death within 10 years.

Nonetheless, the more than 50,000 rescue and recovery workers who went to help at the WTC are suffering from high levels of mental and physical illness, says a third paper.

“Our findings show a substantial burden of persistent physical and mental disorders in rescue and recovery workers who rushed to the site of the WTC and laboured there for weeks and months 10 years ago. Many of these individuals now suffer from multiple health problems,” write Dr. Juan Wisnivesky and colleagues from the Mount Sinai School of Medicine in New York.

28% of the rescue and recovery workers have suffered depression at some time since 9/11; 32% have experienced post-traumatic stress disorder, and 21% panic disorder. Police officers have lower rates – 7%, 9% and 8% respectively – perhaps because of previous stressful experiences, the sort of people who are recruited, or under-reporting for fear of job-related repercussions.

Many of the 27,000 workers, including police officers, firefighters, construction workers, and municipal workers, whose health has been monitored since 9/11 have breathing-related problems. 42% have respiratory problems.

“Inhalation of toxic, highly alkaline dust is probably the cause of upper and lower respiratory injury in rescue and recovery workers,” says the report.

Over nine years, 28% have had asthma, 42% sinusitis and 39% gastro-oesphageal reflux disease.

Matthew Mauer of the New York State department of health writes in a further commentary: “As we mark the 10th anniversary of 9/11, reports of persistent health effects are a sobering reminder that the disaster has had far-reaching effects. One cannot help but wonder what will be reported when we mark the 20th anniversary of this tragedy.”