ARena is the app to install for Droid Bionic scavenger hunt

Verizon launched an app for an “augmented reality” scavenger hunt (from September 4 until September 7). The participants could win “the smartphone that controls them all”, the Droid Bionic.

The contestants will have to look  around the city for photos of HDTVs, laptops, tablets, and quadcopters. The prizes include 16 Droid Bionic handsets, four 40-inch LED HDTVs, four Motorola XOOM tablets, four laptops, and four video-streaming Quadcopters. Each player has 30 minutes per game to track down a prize and can play up to 48 times a day.

“Each day for four days, four lucky hunters will win Bionic and one of the machines—there are up to 192 chances to win each prize. Good luck and safe hunting.” (the app description).

ARena is the augmented reality app required to follow the clues  and it can be found on the Android Market. 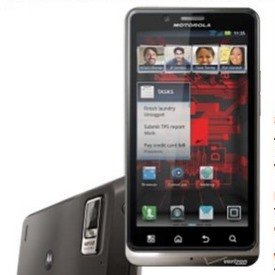 After a waiting of nine months for specifics about the Motorola Droid Bionic, Verizon’s first dual-core smartphone on its high-speed 4G LTE network, Droid Bionic seems to be released on September 8.

The smartphone first showed up with a Tegra 2 dual-core processor. Later, it was said that Droid Bionic would be fitted with a TI OMAP 1.2 GHz processor. The Droid Bionic will have 1GB RAM and 16GB internal memory configuration. It is presumed to have an 8MP camera with dual-LED flash that will feature 1080p video capture capability. Droid Bionic was first showcased with 5.5-ounce weight and 0.52-inch thickness. It comes pre-installed with Android Gingerbread.

Droid Bionic has webtop capabilities (a full suite of Google Apps) and a separately sold lapdock that connects the mobile display to keyboard and mouse.

On the MAP (minimum advertised price) list of upcoming Verizon phones and tablets the Droid Bionic shows with a $299.99 price tag. Droid Bionic is listed as having an average retail value (ARV) of $589.99. Everyone who wants to avoid signing a two-year contract for the Bionic can likely expect to spend $590.

The MAP list includes other devices like the HTC Rhyme (supposed to be a Beat By Dr Dre integrated phone) and a $499 Motorola XOOM LTE tablet that is set to release on the same day as the Motorola Droid Bionic. The XOOM LTE tablet is cheaper than when it was first released and comes preloaded with LTE support.

If you want to enter Droid Bionic scavenger hunt, you should read the instructions on droiddoes.com and download ARena from market.android.com.