[googlead tip=”lista_mare” aliniat=”stanga”]Authorities around Niagara Falls were searching for the body of a young woman presumed dead Monday after she fell into the water above the famous waterfall and vanished.

[googlead tip=”patrat_mic” aliniat=”stanga”]Police warned tourists Monday not to climb a railing at the top of Niagara Falls after an international student from Japan fell off the edge and was swept over the falls on the weekend.

The woman was swept over Horseshoe Falls, which straddles the US-Canadian border and is the widest and most spectacular of the three cataracts that comprise Niagara Falls. 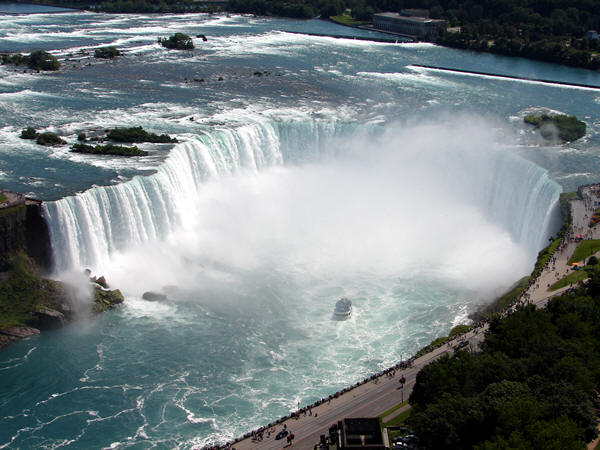 Police on the Canadian side of the falls, where the accident apparently occurred, said the unidentified woman was enjoying the view from an area known as Table Rock about 8:30 p.m. Sunday.

Another woman with her was not injured. News reports identified the pair as students in their 20s and said the incident was captured on surveillance video and that no foul play was suspected.

Niagara Parks Police and emergency workers combed the area with helicopters and boats, but couldn’t find the woman, who is presumed to have drowned.

Search crews instead found male remains in a whirlpool of the lower Niagara River, but police said there is no connection to the missing student.

[googlead tip=”patrat_mic” aliniat=”stanga”]“The woman, who came from Japan and studied at a Toronto-area school, was visiting the falls with a friend around 8:30 p.m. Sunday,” police said.

She climbed over the railing and straddled it to look at the falls. When she stood up, the student apparently lost her footing and fell into the river 24 metres (60 feet) upstream from the brink of the falls. The swift current swept her over.

“Scaling the wall is clearly dangerous and prohibited, but visitors do it every day,” said Niagara Parks Police Chief Doug Kane.

Still, the police chief said it’s the first time he’s heard of a tourist tumbling off the edge in that spot.

“We get about 11 million people a year here who view that annually – this is the first occurrence of this nature that I can recall,” said Doug Kane, who has worked in the region for 35 years.

Police said the incident was captured on surveillance video and foul play is not suspected.

Authorities were working with the Japanese consulate Monday to contact the student’s family.