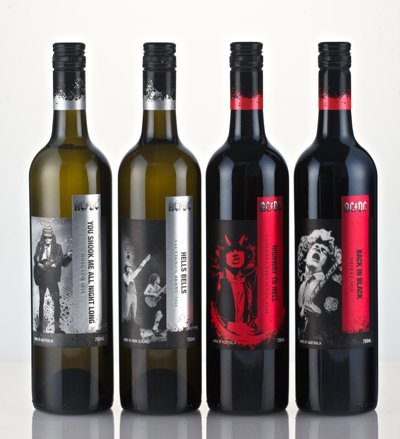 AC/DC, the World’s Top Live Rock Band, has teamed up with one of Australia’s major wineries, Warburn Estate, and Australia’s leading retailer, Woolworths, to release their own range of wines in Australia – AC/DC: The Wine.

The rock band signed with liquor company Warburn Estate to lend their names and the titles of some of their biggest hits to a line of fine wines.[googlead tip=”patrat_mic” aliniat=”dreapta”]

“We wanted to make sure that AC/DC’s hometown fan base could have easy access to their rock icons’ wines. For us it was a no-brainer to make it available nationally, no one misses out,” said Steve Donohue, General Manager of Bbuying for the Woolworths Liquor Group, which will sell the drinks.

Warburn Estate, one of Australia’s top wineries, said the new AC/DC wine collection will be available in 4 different selections:

The wines will hit stores later this month and will be available at Liquor Woolworths, Dan Murphy and BWS liquor stores throughout Australia.

[googlead tip=”vertical_mediu” aliniat=”dreapta”] AC/DC singer Bon Scott died on February 19, 1980 in London, England after he choked on his own vomit while sleeping in a friend’s car following a night of drinking.

A number of rock bands have launched their own wine labels or wine collections over the last few years, including members of KISS, MOTÖRHEAD, WHITESNAKE, QUEENSRŸCHE, WARRANT and SATYRICON.

The AC/DC Collector’s Edition Monopoly is the first and only game that combines the risk taking, deal making Monopoly game play with one of the most legendary and enduring rock and roll bands of all time, allowing fans to vie for control of AC/DC’s most iconic albums and international locations.

AC/DC follows METALLICA, KISS, THE BEATLES, ELVIS PRESLEY and THE GRATEFUL DEAD, among other artists, who have their own Monopoly games.