28 trucks were parked at a terminal on the outskirts of the provincial capital Peshawar when an explosion triggered a fire that engulfed 16 of the vehicles, AFP reported. 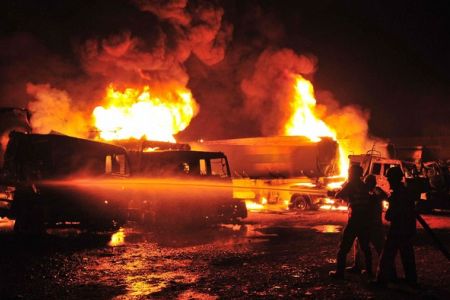 “We are trying to move away other oil tankers. We are not clear whether the bomb was planted in the terminal or with a tanker,”

In addition, police official said that there were no reports of any casualties.

Mohammad Ijaz Khan, senior police officer in Peshawar, said three explosions were heard before the fire swept through the parked tankers and fire fighters were hardly trying to control the blaze.

Police cordoned off the area after the incident and launched a search operation to track down the attackers.

So far, no group has claimed the attack.

NATO and US military rely heavily on the Pakistani supply route into landlocked Afghanistan, more so now that Taliban attacks are increasing.

As a reaction to this incident, the Pakistani authorities have deployed several police contingents and military forces on all major roads in the area to prevent the new attacks.

Recently, Taliban militants have carried out numerous attacks in the rugged tribal area, torching hundreds of NATO vehicles and containers destined for foreign troops in Afghanistan.

Supplies arrive by sea in the southern port city of Karachi, where security analysts believe most of the Afghan Taliban leadership are now hiding. From Karachi, the largest city of Pakistan, they have to travel in long, exposed convoys through a northwest province, Khyber Pakhtunkhwa.

Using other routes, largely through Russia and the Central Asian states, have proved to be too costly, both economically and politically.